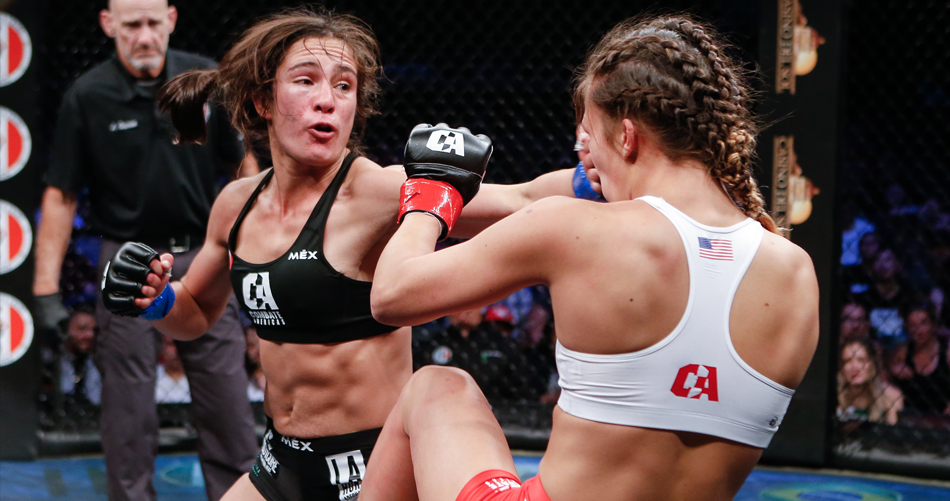 Jauregui debuted with the promotion in April this year for Combate Reinas, an event in which she shared “La Jaula” with Martinez. With a 1-0 record, the fighter born in Tijuana, Baja California, defeated Daniela Espinosa decisively. Jauregui finished the fight in just 13 seconds, managing to knock down her opponent with a vicious short left hook, forcing the referee to stop the fight.

Expectations were high for the 19-year-old fighter, as she entered “La Jaula” for the second time, facing Mckenna Mitchell in “Combate Americas: Tucson Unbreakable, presented by Cricket Wireless” event. Jauregui did not disappoint. Through 10 minutes of action, the Mexican warrior was able to connect multiple times with Mitchell’s face, including strikes from the ground, injuring her right eye and taking the victory via doctor stoppage.

Now, with two consecutive, devastating victories, Jauregui is lobbying for a fight against Martinez . In a Combate Americas’ interview, the charismatic fighter challenged Martinez.

“I feel very happy to be able to fight in this company,” Jauregui said after her fight last week. “I’m willing to face [any] woman they put in front of me and be able to step up, but later, I’d like to face Super Mely, who is a woman that I admire so much and does a great job inside the cage. Then, my respects, and I think it would be a great fight for real, later of course.”

“Super Mely”, who is also from Mexico, is currently undefeated with a 6-0 record (5-wins within Combate Americas), and has finished 4 of his 5 opponents in “La Jaula”, two of them in the first round. Martinez’s last fight had an overwhelming second round TKO victory over Caroline Gallardo in the Combate Reinas main event.

It remains to be seen if Jauregui will be given a chance to take on Martinez, a well-positioned star inside Combate Americas.