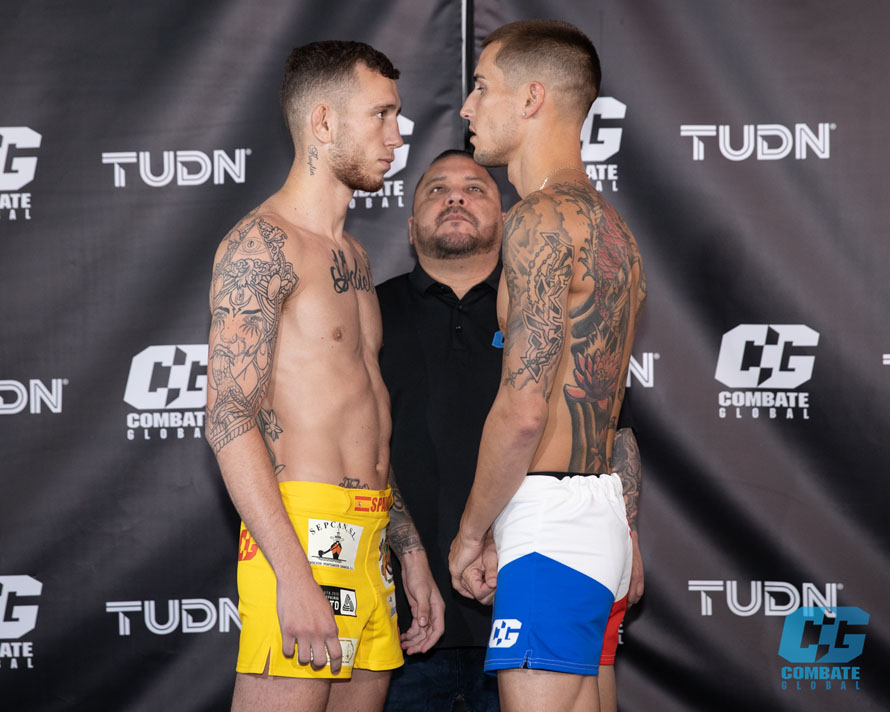 Miami, FL -Combate Global returns with Much More Action (MMA) and the debut of a top ranked Spanish fighter this Friday live.

The card features top talent bringing their skills inside la jaula including the evening main event between Ricky Bandejas (14-5) vs newly signed fighter Kevin Cordero (11-2) in a bantamweight bout.

At only 21 years of age, Cordero of the Canary Islands, Spain counts on over ten professional fights. The majority of his victories come by way of finishes. Only one victory comes by way of split decision. He is on a five-fight win streak.

Meanwhile, Bandejas is coming off a successful Combate Global victory defeating Terry Bartholomew by was of a unanimous decision.

Expect these two fighters to test each other stand up skills right from the start of the fight. Bandejas fluid striking could be a test for Cordero. For Cordero, knowing he has a few victories by way of submission, he should test Bandejas on the floor.

However, for Bandejas, who trains at American Top Team, counting on his strong takedown defense could make it difficult for Cordero. Hence, if Bandejas plays on the defense and finds an opening, he could out strike Cordero and earn a victory. Expect this fight to go the distance.

Hernandez made his Combate Global debut part of the eight-man bantamweight tournament reaching the semi-finals. He defeated Manny Vazques by split decision, but later lost to Francisco Rivera by unanimous decision.

Meanwhile, Chile’s Torres will return to la jaula, as he has competed for the promotion on two occasions. His last fight was in November 2020 defeating Gaston Manzur by referee stoppage in the fourth round.

An American Kickboxing Academy standout, expect Hernandez to use his wrestling to surprise Torres who loves to display his boxing skills. Hernandez has a strong challenge ahead of him, but if he is able to bring Torres to the ground, he might be the one to award him his first defeat.

Also, in a women’s featured bout Chile’s Gloria Bravo (4-5) returns to la jaula for the second time this year as she faces newcomer Jade Jorand (0-1) from France.

In July, Bravo lost to Ana Palacios by way of submission in the second round. Bravo says she is a lot focused this time around than her earlier fight this year. Her focus will be tested by Jorand whose background is in kickboxing. Jorand has much to prove as she is in search for her first MMA victory. She counts on about 80 fights in kickboxing and Muay Thai, but the panorama is different in MMA.