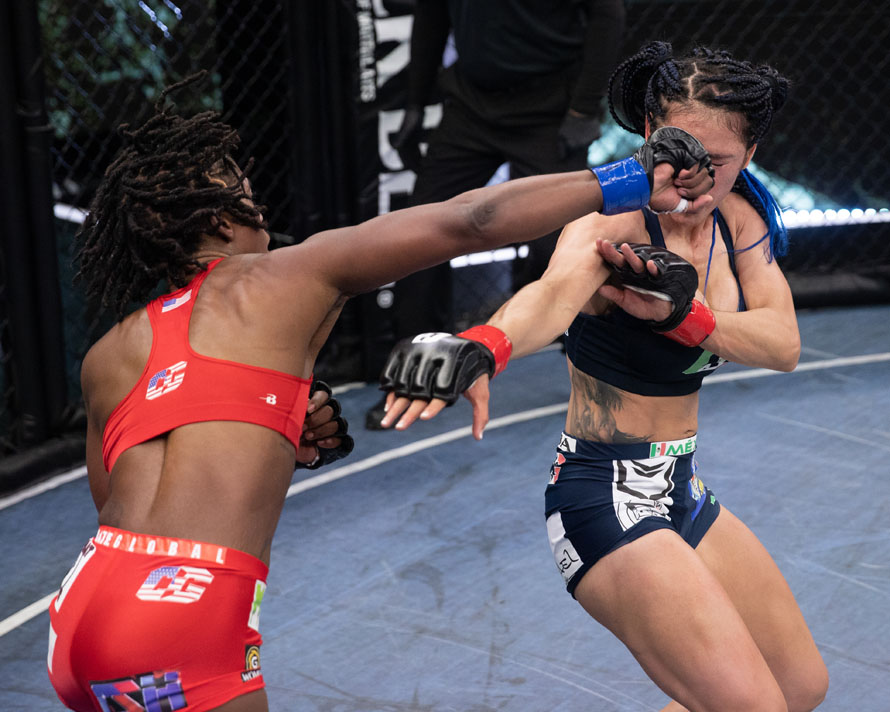 Walking into la jaula nervous, Coates used proper footwork to prevent Acosta from attacking with a fury of punches.

Coates maneuvered the pace of the fight leading her to a victory.

Acosta was the first to throw a right hook. Acosta connected with a heavy right hand. Coates eventually got in close range where she tripped her opponent and the fight landed on the canvass.

Coates finished off the round landing a right hand. Acosta’s left cheek was swollen.

Most of the round was spent on their feet with both women trading hands and kicks. Coates took down Acosta with a calf kick. Coates’ confidence was more evident.

Acosta threw a kick, but it was caught by Coates leading the fight to the ground. But Acosta found a way to escape. Coates landed a hard hand rocking Acosta, the fight result was left to the judges.

The size difference was noticeable, Avalos quickly went for the takedown where he searched for a quick submission victory.

However, Rivera rolled and defended, even though, he landed shots from ground-and-pound position.

Avalos threw a jab, right hand followed by a low kick to open up the second round. The fight went to the ground where Avalos worked from guard position.

Rivera had a point deducted for putting his toes in the cage.

Rivera opened with a flying knee which brought Avalos to the ground. However, Avalos recovered and he gained control in guard position. However, just like the previous round, Avalos dominated from ground position. The fight result was left to the judges.

Bandejas opened up the first round with a low kick and followed with punches. A wrestler, Bartholomew searched for a takedown, but Bandejas put a stop to every attempt.

Bartholomew connected with a right hand hoping to distract Bandejas enough for him to go for a takedown. However, it wasn’t enough, and the fight continued on the feet.

Bartholomew again attempted takedowns, but Bandejas just wouldn’t give in. Bandejas continued using hand combinations and kicks. The fight was dominated by Bandejas.

Alequin remains undefeated as routed Sanchez by rear naked choke at 2:14 in the first round. In his return to la jaula, Alequin made it look easy as he first searched for an arm bar, but settled for the rear naked choke.