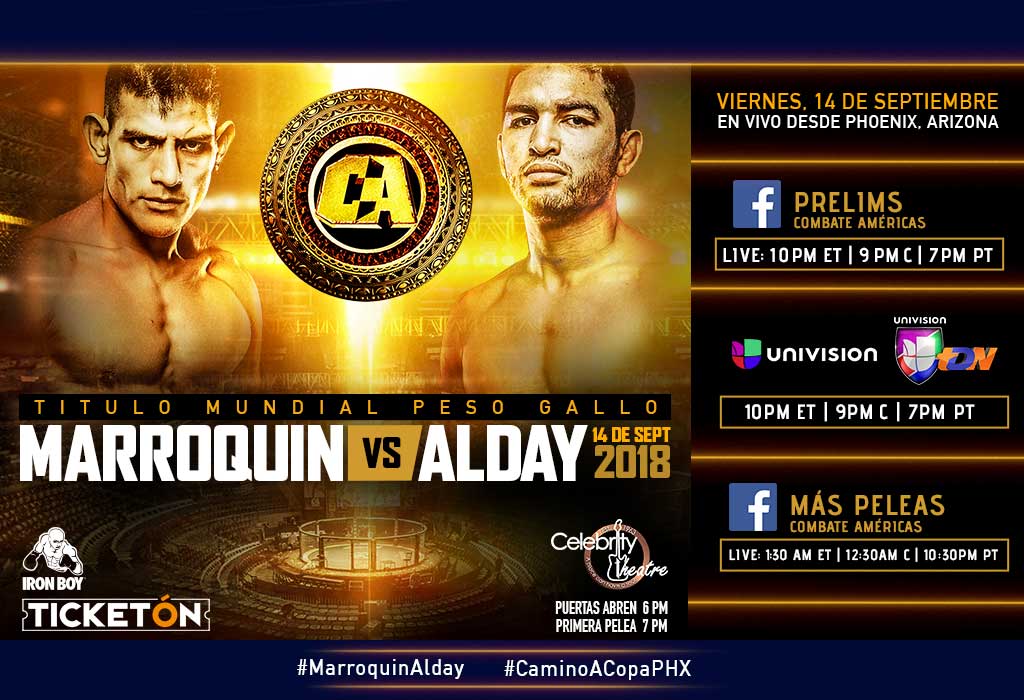 Priced from $30, tickets for the Combate Americas world championship MMA extravaganza are on sale now.

The much-anticipated showdown will mark the first time in history that a major, worldwide recognized MMA sports franchise will utilize three rounds, rather than the traditional, five-round format, for a world championship bout.

“MMA now stands for ‘Mucha Más Acción,’ and this is exactly what the world is going to see with a three-round title fight – more action in a shorter, faster and superior format that serves Combate Americas’ younger, millennial audience perfectly,” said Combate Americas CEO Campbell McLaren.

“This championship fight,” continued McLaren, “is a remarkable showdown between two ferocious warriors whose recent, respective performances in La Jaula have earned them the right to face off with each other for a coveted world title.

“We are thrilled to deliver another season of Combate Americas to our viewers and broadcast its first-ever world championship match,” said Juan Carlos Rodríguez, president, Univision Deportes. “We look forward to treating MMA fans to all the action of one of the most popular sports today with Univision Deportes’ best-in-class sports production.”

Also featured on the live simulcast will be a women’s flyweight (125) contest between top prospect Tracy Cortez (3-1) of Phoenix and Brandi Narvaez (0-2) of Corpus Christi, Texas.

Alday, a 26-year-old native of Hermosillo, Sonora and resident of Tucson, Ariz., is coming off his career-best victory to date, a split decision win over Castaneda in the main event of the historic, first, live Univision and UDN simulcast of MMA action with “Combate Estrellas I” in Los Angeles, Calif.

Cortez is an  explosive, 24-year-old fighter who will look to extend a three-fight winning streak in what will mark her promotional debut with Combate Americas and first-ever live television appearance.

In her last fight, she pulled off a first round (4:27) victory by way of submission (rear-naked choke) against Monica Medina.

Narvaez, hailing from Corpus Christi, Texas, is looking for her first victory as a professional mixed martial artist, after compiling a perfect, 4-0 record under amateur status. The 33-year-old is a seasoned Brazilian Jiu-Jitsu competitor schooled by husband and former MMA star Roger Narvaez.

An additional matchup for the live, televised, main card of the Combate Americas world championship event will be announced soon, as will a complete, preliminary bout card.

Doors at Celebrity Theatre open at 6 p.m. PT, with the first preliminary bout will beginning at 7 p.m.