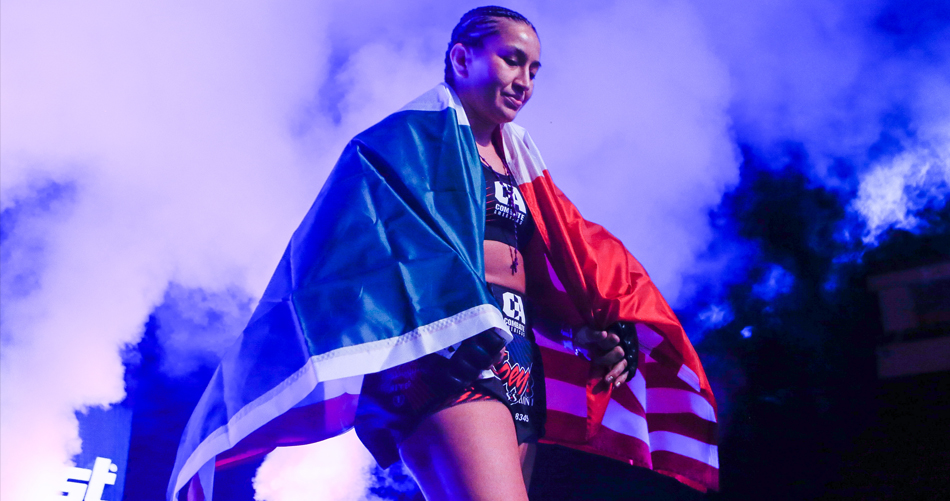 Combate Americas today announced that it will return to Stockton, Calif. with a stacked Mixed Martial Arts (MMA) event at Stockton Arena on Friday, Dec. 13, live on television in the U.S. on both Univision (12 a.m. ET/PT) and TUDN (12 a.m. ET/9 p.m.PT).

Priced from $25, tickets for the Combate Americas live event in Stockton are on sale at Ticketmaster.com, as well as at the Stockton Arena box office.

In the main event, former world flyweight (125 pounds) champion Zoila “The Warrior Princess” Frausto (14-5) will meet an opponent to be announced soon.

“Mucha Más Acción is coming back to Stockton in full force with Zoila Frausto and a host of other world-class and up-and-coming stars before the end of 2019, and we intend to make a big mark there,” said Combate Americas CEO Campbell McLaren.

Announced today were the first three, complete matchups for the event, including a featured, featherweight (145 pounds) battle between Javier “Blair” Reyes (8-3) and Joe “Nine Lives” Neal (6-4).

Reyes of Bogota, Colombia is a 26-year-old, two-time veteran of Combate Americas action, who will be looking for his first victory in La Jaula, the Combate Americas competition cage, and to bounce back from a third round (3:08) TKO (punches) defeat at the hands of Alex Velasco on February 8.

To date, Reyes has earned five of his eight career wins by (T)KO or submission, and has recently been training in Las Vegas, Nev. to take his career to the next level.

Neal is a 33-year-old protégé of former Strikeforce world champion Gilbert “El Niño” Melendez, and a resident of Hayward, Calif., who has never been finished in professional competition.

In preliminary card action announced today, Nate Diaz team member Jose Aguayo (3-2) of Stockton will face off with Michael Humphrey (0-3) of Sacramento, Calif. at featherweight, while Yajaira Cunningham (1-1) of Miami, Fla. and McKenna Mitchell (0-2) of Aptos, Calif. will meet at strawweight (115 pounds).

Additional matchups will be announced soon.