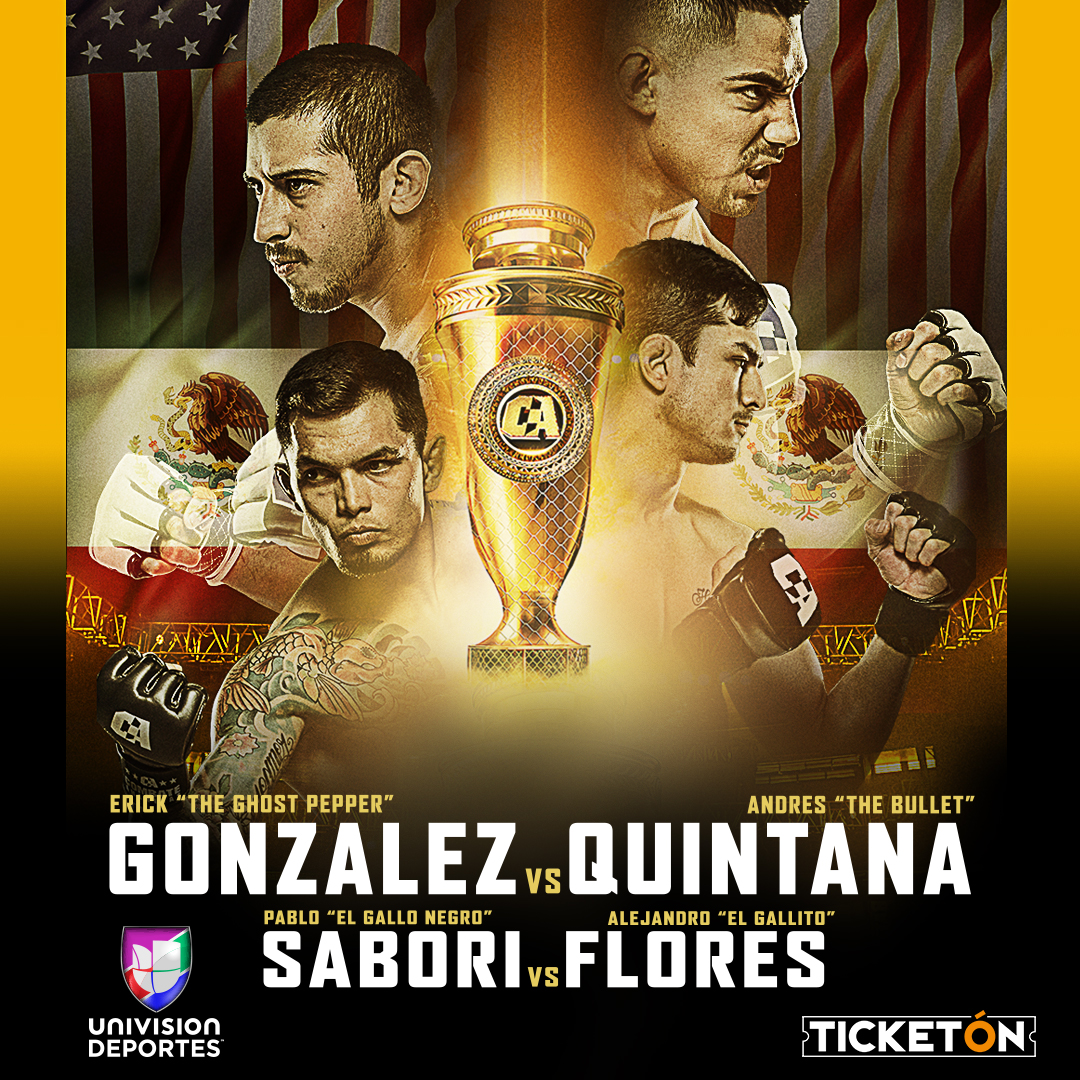 Winners of the one-round, featherweight fights will represent
the U.S. and Mexico in the $100,000 grand prize tournament

The “Combate Americas: Camino a Copa Combate” event, which will air live from The Walter Pyramid in Long Beach, will feature a pair of one, five-minute round featherweight (145 pounds) fights, the winners of which represent their respective countries – the U.S. and Mexico – in the “COPA COMBATE,” one-night, eight-man, $100,000 tournament, the date and location of which will be announced soon.

Priced from $30, tickets for “Combate Americas: Camino A Copa Combate” are on sale at The Walter Pyramid’s online ticketing platform, as well at Ticketon.com.

“These one-round qualifier fights are symbolic of what Combate Americas represents – ‘Mucha Mas Accion,’ or ‘Much More Action,” said Combate Americas CEO Campbell McLaren. “Faster-paced fights in a shorter time frame create the most electrifying platform in the sport and, with the opportunity to represent your country in the “COPA COMBATE,” $100,000 grand prize tournament on the line, the intensity will be at an all-new high.”

Facing off with each other in one of the two “Camino a Copa Combate” one, five-minute round, featherweight fights with the right to represent the U.S. in the high-stakes tournament, will be Erick “The Ghost Pepper” Gonzalez (8-2) and Andres “The Bullet” Quintana (14-2).

In the second ‘Camino a Copa’ one-round, five-minute fight, Pablo “El Gallo Negro” Sabori (8-4) will collide with Alejandro “El Gallito” Flores (12-1). The winner of the matchup will represent Mexico in the “COPA COMBATE” tournament.

The 5-foot-10, 26-year-old Gonzalez of Redondo Beach, Calif. will drop from lightweight (155 pounds) to featherweight for the first time since joining the ranks of Combate Americas, in an effort to qualify for the coveted, one-night tournament.

A relentless battler capable of finishing opponents in any range of combat, Gonzalez has earned six of his eight professional career wins by way of (T)KO or submission, including his last fight in which he avenged a previous, unanimous decision defeat at the hands of Danny “The Realist” Ramirez by scoring a highlight reel, first-round (3:15) knockout (punches) on Ramirez at “Combate Estrellas” in Los Angeles on April 13.

Quintana, a 6-foot, 27-year-old trailblazer who hails from Roswell, N.M., has been perfect to date in La Jaula, the Combate Americas cage, winning all four of his matchups under the promotional banner since he made his debut last year.

The 5-foot-8, 26-year-old Sabori of San Luis Rio Colorado, Sonora is a feared, devastating finisher who boasts a 100 percent finish rate, with all 8 of his professional career wins to date having come by way of knockout or submission, 5 of them inside the first round of action.

In his last start on July 29, 2017 in Tijuana, Baja California, Mexico, Sabori slugged his way to a third round (3:03) TKO (punches) of Andrew Lagdaan.

Flores is a 5-foot-10, 27-year-old, fast-rising star out of Monterrey, Nuevo Leon who will return to 145 pounds after a phenomenal run in the bantamweight (135 pounds) class.

An additional matchup for the live televised, main card portion of the Combate Americas world championship event will be announced soon, as will a complete, preliminary bout card.

Doors at The Walter Pyramid will open at 6 p.m. PT on September 28, and the first preliminary bout will begin at 7 p.m.