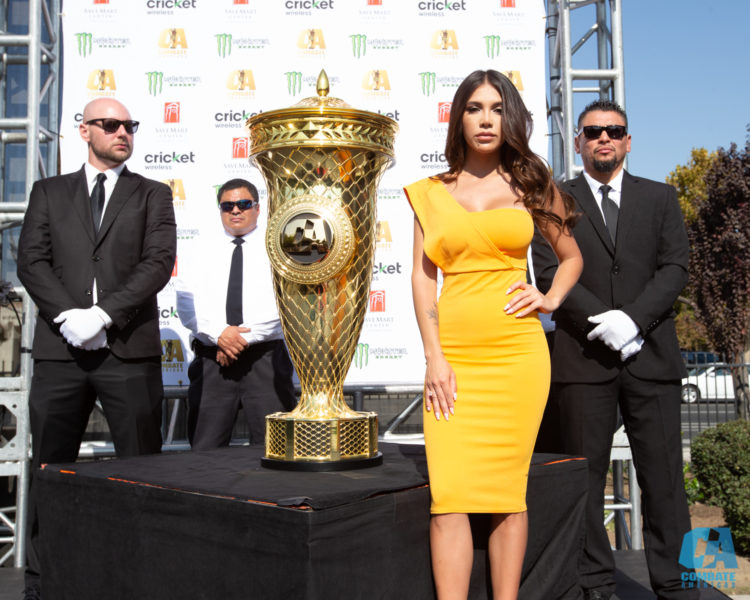 LIVE ON DAZN, UNIVISION AND UNIVISION DEPORTES NETWORK FROM SAVE MART CENTER IN FRESNO, CALIF. ON FRIDAY, DEC. 7

The winner of the tournament will have persevered through three fights in one night to claim the grand prize check and the trophy.

The “COPA COMBATE” winner’s trophy unveiled today stands over 4 and a half feet tall, and is nearly 2 feet wide at its widest point.   Custom made by U.K.-based CA Models, the makers of the Viking-style headdress that music superstar Madonna wore during her 2012 NFL SuperBowl halftime performance, the gold-colored trophy, valued at $100,000, is constructed from high-tech composite plastics used in Formula 1 racing and aerospace.

Cannetti is the 29-year-old, younger brother of MMA superstar Guido “Ninja” Cannetti, and is riding a three-fight winning streak.

Villaseca is a 31-year-old, battle-tested veteran who has competed on three different continents – North America, South America and Europe – and who has earned 10 of his 13 professional victories via (T)KO or submission.

Bedoya was a contestant on The Ultimate Fighter: Latin America reality television series. The 27-year-old has scored three of his six professional victories by way of submission.

The 26-year-old Gonzales is the number one ranked featherweight fighter in Peru.  He is coming off a thunderous,  first round (3:34) TKO (punches) of Mariano Rocca on August 18.

The official “COPA COMBATE” tournament brackets with quarterfinal stage matchups for the one-night, eight-man tournament will be announced soon.

Priced from $30, tickets for “COPA COMBATE” are on sale online at CombateAmericas.com/Tickets and at Ticketmaster.com, as well as at the Save Mart Center box office.

Doors at Save Mart Center will open for the event at 5 p.m. PT on December 7, and the first preliminary bout will begin at 6 p.m.

Combate Americas also announced today that it has partnered with Jimenez Grappling Academy, an Exeter-based non-profit organization focused on utilizing martial arts classes to create family and community-oriented programs.  As part of the local partnership, MMA superstar Julianna “The Venezuelan Vixen” Peña will offer an MMA seminar to Jimenez’s students on Wednesday, Dec. 5, two days before the “COPA COMBATE” affair.