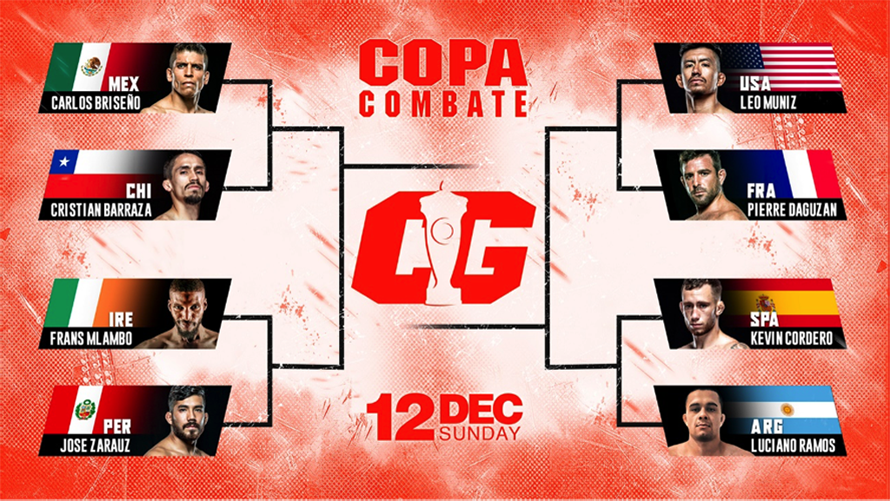 In the opposite bracket, Leo Muniz (6-1) of the U.S. will square off with Pierre “The French Hawaiian” Daguzan (6-5) of France, and Kevin Cordero (12-2) of Spain will collide with Luciano “El Aguila” Ramos (8-6) of Argentina.

The 31-year-old Briseño of Mexico City holds a black belt in Tae Kwon Do, and is a member of the Bonebreakers fight camp. He enters La Jaula, the Combate Global competition cage, on a two-fight win streak after earning a unanimous decision over Adam Martinez in what was Briseño’s Combate Global debut on October 1.

The 28-year-old Barraza of Santiago is a Brazilian Jiu-Jitsu brown belt who has notched all 7 of his professional career wins by way of submission. He is coming off of a first round (2:01) armbar submission of Mexico’s Diego Silva on October 22.

Mlambo, a 30-year-old protégé of famed trainer John Kavanagh and former International Mixed Martial Arts Federation (IMMAF) world championships gold medalist, will become the first fighter in history to represent Ireland in the “COPA COMBATE” tournament. To date, Mlambo has produced 8 of his 10 career wins via (T)KO or submission, and will enter “COPA COMBATE” on a two-fight win streak.

Fighting out of Lima, the 28-year-old Zarauz holds the most professional experience of any of the “COPA COMBATE” tournament entrants, and will enter La Jaula for the second time in 2021 after securing a unanimous decision win over Fernando Noriega in a regional event in Peru on July 17.

The 31-year-old Muniz is a resident of Tobyhanna, Pa. and a native of The Bronx, N.Y. He put together back-to-back victories over Team Alpha Male member Hector “El Matador” Fajardo on May 29 and August 13, respectively, to secure an entry to “COPA COMBATE.”

At 35 years of age, Daguzan, a native of Versailles, Yvelines and resident of Honolulu, Hawaii, is the eldest competitor in the tournament field. He holds a purple belt in Brazilian Jiu-Jitsu, and is coming off a unanimous decision win over Carlos Puente, Jr. in Combate Global action on July 16.

The 22-year-old Cordero of Las Palmas, Gran Canaria, is the number one pound-for-pound rising star out of Spain, and the youngest of the eight tournament entrants. He has claimed 9 of his 12 professional wins via (T)KO or submission, including his last start and Combate Global debut on September 3, when he produced a first round (4:59) submission (triangle choke) of veteran battler Ricky Bandejas.

Ramos is a 25-year-old finisher who hails from Concordia, and who relocated to Stockton, Calif. last year in order to train with the team founded by famed MMA siblings Nick and Nate Diaz. Since making the leap to the Diaz camp, Ramos, who has achieved six of eight career wins by way of (T)KO or submission, has been victorious in both of his MMA bouts in 2021, most recently defeating Keilen Fantroy via first round (1:54) submission (triangle choke) on July 31.

In two previously announced women’s bouts that will be featured on the “COPA COMBATE” card in addition to the tournament, Criszaida Adames (5-1) will throw down with Caroline “Taz” Gallardo (5-4) at strawweight (115 pounds), while Lucero “La Loba” Acosta (2-2) will square off with Rosselyn Chavira (1-0) at flyweight (125 pounds).