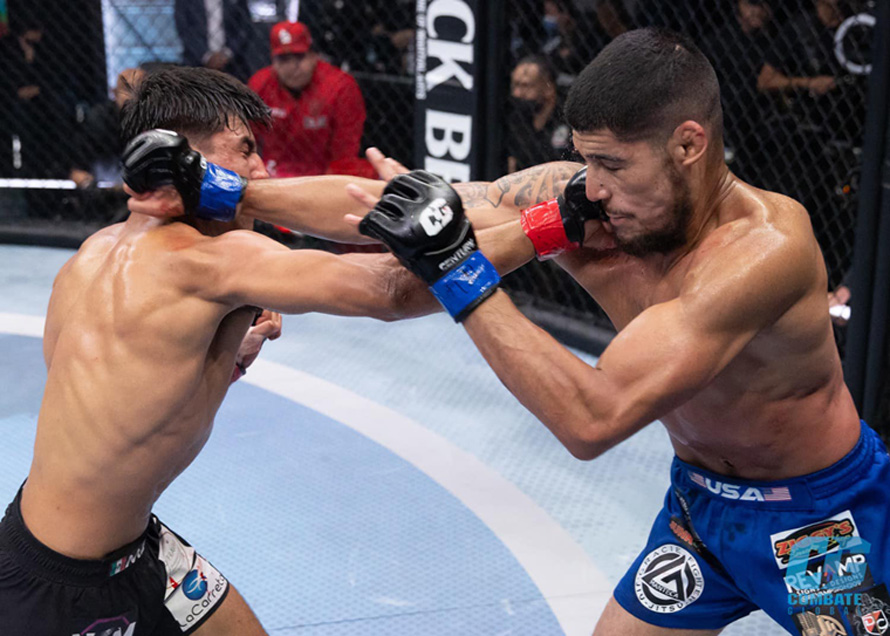 Miami, FL– Cristian “Puas” Perez (10-1) lived up to the hype knocking out the number seven ranked lightweight Samuel “The Alley Cat” Alvarez (7-6) in the main event of CG 2022 August 5: Perez vs Alvarez.

In what turned out to be a highlight reel finish, Perez threw a cross that took the Californian right to the canvass at 3:14 in the third round.

Perez recorded his first knockout victory of 2021 and made a gesture after his victory calling out the number one ranked lightweight Enrique “Baby Bull” Gonzalez (13-4), who defeated the then undefeated Angel Alvarez by knockout last month.

Although he lost, Alvarez displayed an immense show of heart and perseverance. He refused to quit despite Perez attacking Alvarez’s legs that at one point left him struggling to move. Perez attacked his foe with calf kicks.

In the second round, Alvarez suffered a cut to his right eye lead, but once again there was no stopping him and continued to search for a knockout.

Unlike previous fights where Perez excels with his ground game, he showed his development in his boxing, which coming into the fight the advantage went to Alvarez.

A wounded, bloodied but determined Alvarez, refused assistance from physicians and managed to get on his feet after the knockout.

Combate Global fans will have to stay tuned what the future holds for Perez.

Prior to the fight, Amaro said she wanted to test her striking skills and Diaz, who has a background in Muay Thai, was the perfect opponent to do so.

Amaro’s boxing was sharp leaving no openings for Diaz to find a spot to strike. In fact, Diaz stayed back from using her Muay Thai as her kicks were nearly extinct in half way through the fight.

In the second round, Amaro nearly finished the fight when Diaz gave her back and nearly got caught in a rear naked choke. Yet, Diaz survived to make it to the final chapter of the fight.

In the last round, Diaz squared up with Amaro and exchanged hands, but it was not enough for the judges as they awarded the fight to the Texan.

In a featured bout, Vernon Ramos (8-1) of Panama had a successful debut inside la jaula defeating Ivan Castillo by unanimous decision. Castillo depended on his boxing, but Ramos countered landing heavy hands and took the fight to the ground.

Ramos was too much for Castillo and the judges awarded him with the victory.

Tanya Nijjar defeated Alibeth Milliron by rear naked choke submission at 3:01 in the first round.

Chis Boasso defeated Axel Diaz by way of rear naked choke submission at 1:16 in the first round.

Cristian “Puas” Perez defeated Samuel Alvarez by way of knockout at 3:14 in the third round.