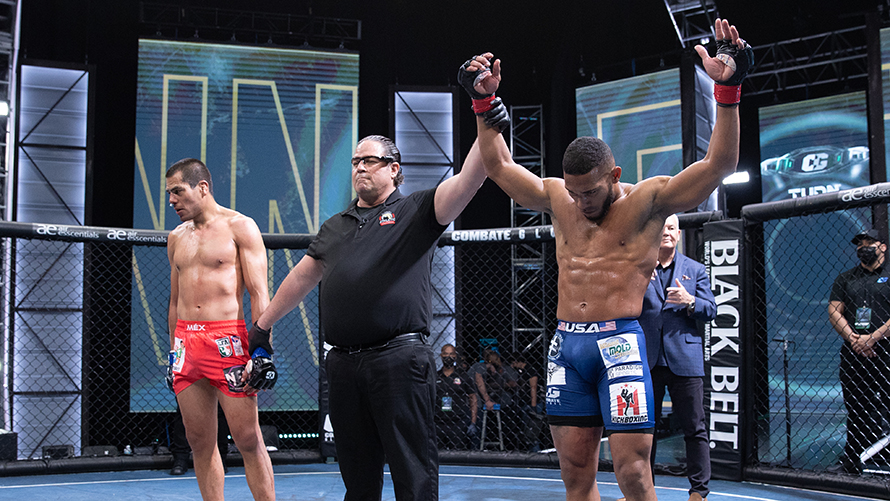 Miami, FL– Cuban American Angel Alvarez (5-0) proved he can finish off his foes with the power of his fists.

In the first 2022 fight card for Combate Global on March 24, Alvarez defeated Mexico’s Daniel Sanchez (3-2) by way of knockout in the second round at 3:04.

In his CG debut last year, he took on Gerrick Bontekoe for three rounds with several opportunities for him to finish off his opponent. However, he took a unanimous decision victory instead.

However, on his second CG fight, Alvarez proved his undefeated record is no laughing matter manhandling Sanchez. The Mexican was left puzzled and couldn’t find any possibilities of landing any shots or takedowns.

Sanchez came off a victory against Jiu Jitsu practitioner Levi Escobar surprising fight fans. But Alvarez was too powerful and too much for Sanchez.

Right from the start, Alvarez, who switched camps and is now training with Sanford MMA, smelled blood and attempted to knockout Sanchez early on banking on his over left hand. In fact, it busted Sanchez’s nose right at the end of the first chapter of the fight.

On the second round, Alvarez continued the onslaught. Sanchez attempted to use his wrestling, but was met by a roadblock.

Alvarez now improves to 5-0 and is a force inside la jaula.

Ortega had the upper hand as she was the taller of the two fighters and reach. She also seemed vicious in her CG debut last year.

Amaya had touted her two previous opponents quickly, so questions were left who she could perform going the distance or taking on a good striker.

Questions were answered: Amaya never seemed to be in trouble. Ortega used her Muay Thai skills but Amaya’s defense was too good taking her down to the canvass. She had had chances of submitting Ortega but came out short something that she’ll workout at Seakson Jiu Jitsu in Spokane, Washington with the likes of Juliana Pena and Michael Chiesa.

There were some mistakes like giving her back to Ortega after an exchange, but Amaya is serious competition in her respective weight class.

Moreover, Jimmy “Sandstorm” Sandlin (5-4) defeated newcomer Ruben Lozano by way of guillotine choke submission in the first round at 4:52.

Also, Jake Childers defeated Miguel Villegas, who came in ten pounds overweight. Villegas looked out gas in the second round peddling and avoiding any exchanges with Childers.

It was a different Villegas who made his debut last year showing up inside la jaula explosively, but his power was cut short real quickly as the working man Childers took the win in a unanimous decision.