Determination: The Fight of the "Gallo Negro" - Combate Global
Skip to content
News » 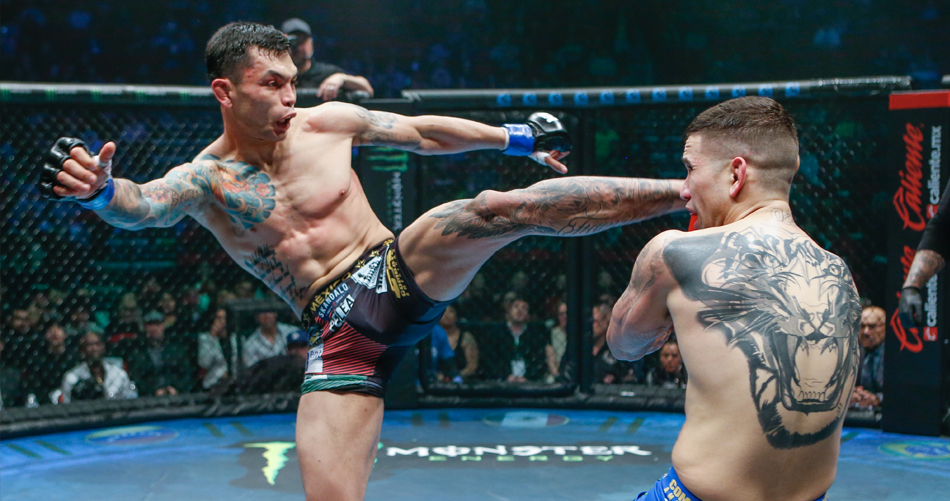 A fight of epic proportions took place in Fresno, California, last February 22nd;  the clash between the Mexican Pablo “El Gallo Negro” Sabori (9-4) and the American Anthony “The Shark” Avila (18-5).

The fierce battle saw Avila as the winner by majority decision, however, the real story began earlier in the fight.  Pablo Sabori suffered a fractured jaw in the first round and continued with the fight.

The incredible determination of  Sabori, 27 years old, propelled him through the rest of the fight, despite being against an opponent as skilled as Anthony Avila.

Sabori describes how he suffered the fracture in the first moments of the fight, the process of communicating the injury to the coach, and how he overcame the intense pain.

“It took me a few seconds to reconnect to what I was doing, which was the fight, and finished the first round in the clinch and trying to attack Avila. When the round was over [Avila] told me, ‘it’s over, it’s over.’ I was completely gone.” 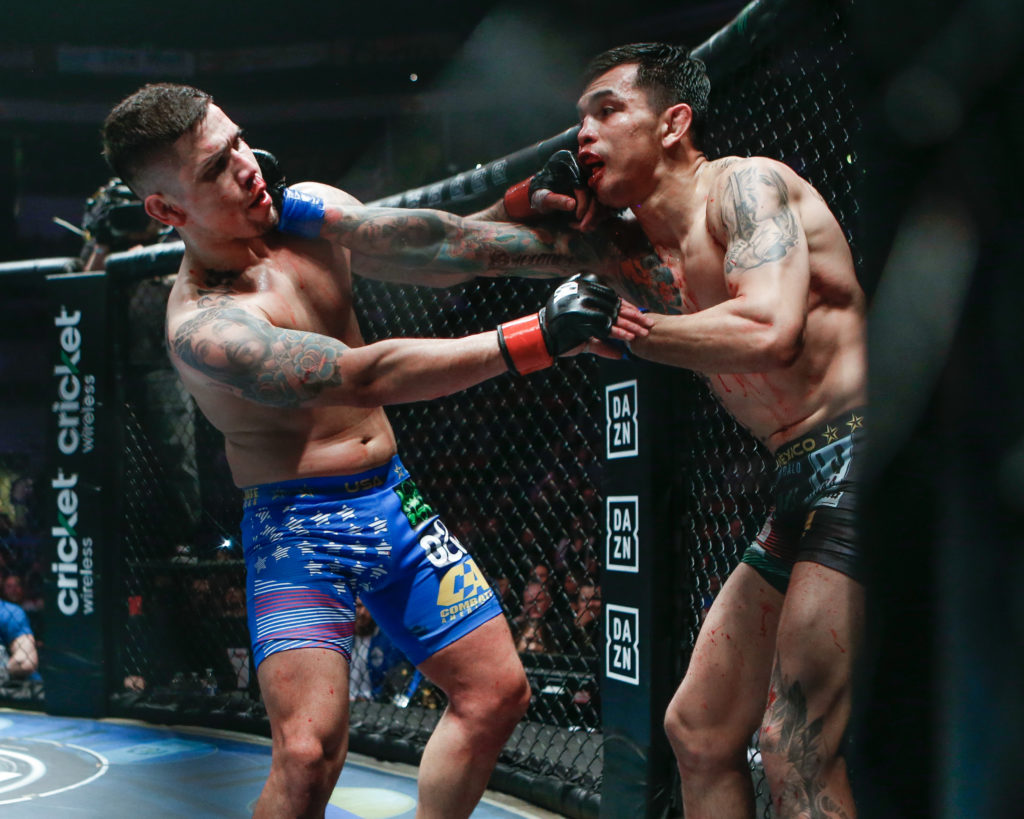 “I went back to the corner, sat down and the first thing I told Marcelo Rojo was to slap me, because my face felt weird. Marcelo took my mouth guard off and looked at my blood and he thought I had tooth off or something, and he said no, everything was fine and he wasn’t going to slap me. There I said to my other corner, ‘hey slap me I need to get up’, I felt my face strange and I knew something was happening. I did not know the magnitude of the situation, but I knew I had to connect to go out to fight, because by that knockdown I was losing.”

It was time to compete in the second round,  which was the moment when Sabori realized that his jaw was broken. However, it never crossed his mind to give up the fight.

“I got up from the stool to start the second round and when I [bit] my mouth protector, [that]was when I felt my jaw and I realized what was going on. The doctor climbs up and I tell him that I’m fine, it never crossed my mind to abandon the fight. There are some hooks that hit me in the second round, they touched me, but I lasted almost half of the second round adjusting and controlling the pain I was feeling, to connect in the fight. After receiving the first blow I said, ‘come, come, come’, that’s when my brain adjusted to everything. It passed and now forward.

That’s when I closed the second and third rounds with power, trying to go forward and by the second round I couldn’t close my mouth, I fought with my mouth open because of the fracture, so it was easy for Avila to fracture me again, they were two fractures, not just one.” 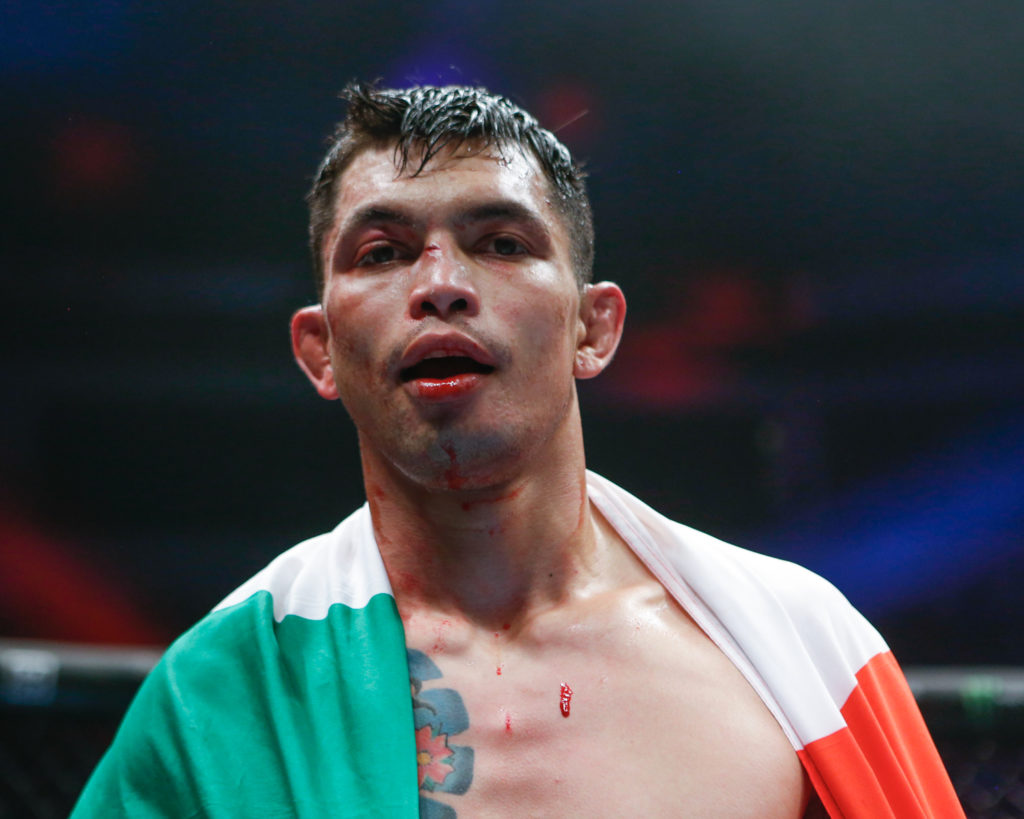 “In the third round I knew that I had to go out to kill or die, I knew that something was very wrong and I was spitting blood. I had to close the round right, although I could not finish the fight despite being close at the end of the third round. The fight ended. I was convinced that I had won. I get into the cage and I want to celebrate, there I realized even more the severity of the injury. My jaw began to hurt with the drop in adrenaline. The transfer to the hospital was immediate; the doctor did not have to check me, the problem was obvious.”

With the fight over, the real battle of recovery was about to begin. Sabori had to keep his mouth closed for seven weeks, using different elements such as plates and wires. The life of the Mexican athlete took a sharp turn during this time, going from a very active lifestyle to one of rest and recovery.

“This changed my life drastically, from being a person who was physically well, to suddenly I couldn’t even move. My mouth was completely closed for seven weeks. My diet was based on liquid, not even cream or anything that couldn’t go through my teeth, just liquid. If I wanted to eat chicken, I had to liquefy the chicken and strain it so that it was just liquid. It was very difficult. I think it was one of the hardest experiences I have had in my life, and people suddenly told me, ‘hey you have the mouth closed but you can hit.’ It was difficult  because the bone had to weld. I could not shake because that could cause me to vomit. I had to bring scissors with me at all times in case I had an attack, and I had to cut the wires that closed my mouth.”

@pablosabori had his jaw broken in the first and went the distance 3 rounds to a decision at @combateamericas 31. Between rounds he asked his corner to slap him to snap him out of a weird feeling (his broken jaw, split right down the front), which pumped him up and had him giving everything he had each subsequent round in a crazy fight ? His mouth here wired shut #combateamericas #pablosabori. #youcantteachheart

“Approximately seven weeks with my mouth closed, no contact, no anything. It was around ten to eleven weeks until I was able to return little by little to the gym. Although I was always there, watching the workouts, helping my teammates. My first training was to hold pads for Marcelo Rojo before his fight against Castaneda. At first, it was difficult because I was agitated, and I felt that I was dizzy and things like that. So it was a drastic change in my life, because I live in Tijuana, where my gym is and I’m used to spending most of the day training. I spent many weeks without doing anything and not affect my recovery.

I am very grateful to the doctors who supported me here in Tijuana with the rehabilitation, they have been a key to my recovery, to be able to talk in this interview, I’m going almost every day to therapy. The therapies they did for me are ultrasound, x-rays and little by little giving it mobility so that the jaw would recover its natural movement. I still have the plaques. The most difficult thing was to chew again, the pains from being immobile for a long time.

People asked me what was the first thing I was going to eat when I could open my mouth. I had many plans, but I had to wait little by little to be recovered. Basically, I wanted to eat any kind of food. I just wanted to chew and enjoy the texture, the fact that I could crush things with my mouth. There were times when I didn’t even want to eat anymore. I was angry with liquids. I lost a lot of weight and well it was a bit difficult. I think what I most enjoyed was eating steak, since before the fight I had that craving for red meat. It took me a while to fulfill my cravings.”

The Aztec warrior was always present at his gym, Entram Gym in Tijuana, to assist his teammates and find a way to contribute to the cause.

Sabori’s eagerness to support his teammates was such that he served as the corner for Eduardo “El Pube” Alvarado in Tucson, Arizona. The fact that he could not speak did not stop his work of communicating his instructions, so he had to improvise and seek solutions to the problem.

“I had the opportunity to go with Eduardo ‘Pube’ Alvarado to his fight in Tucson and I had to be his corner without being able to open my mouth. There is a good connection with my teammates and that was a key piece. I tried to give the instructions I could, or told my partner to shout for me, signs, gestures, tried to help ‘Pube’ and thanks to hard work, he could emerge victorious and I am happy to do what I like best, being in the MMA, perhaps not fighting but supporting my teammates.”

“I want to mention something very important, there were many people on social networks who made negative comments towards my corner and I want to make that clear, I think that if my corner had known that I had a fractured jaw, I know what they would have done. They would have stopped the fight immediately, they would not have thought about it. People ask me why I kept fighting, and it was something I just didn’t think about, I just had to go out and fight, I prepared too much and I wasn’t going to give up that important fight. I want to make it clear that my corner at every moment has been the best, I trust them completely. At all times, I tried to hide the injury in my corner. I arrived and didn’t even talk, I was focused on continuing to fight and at the end of the day to win the fight, that was in my head and I showed it at the end.”

“EL GALLO NEGRO” WILL BE BACK 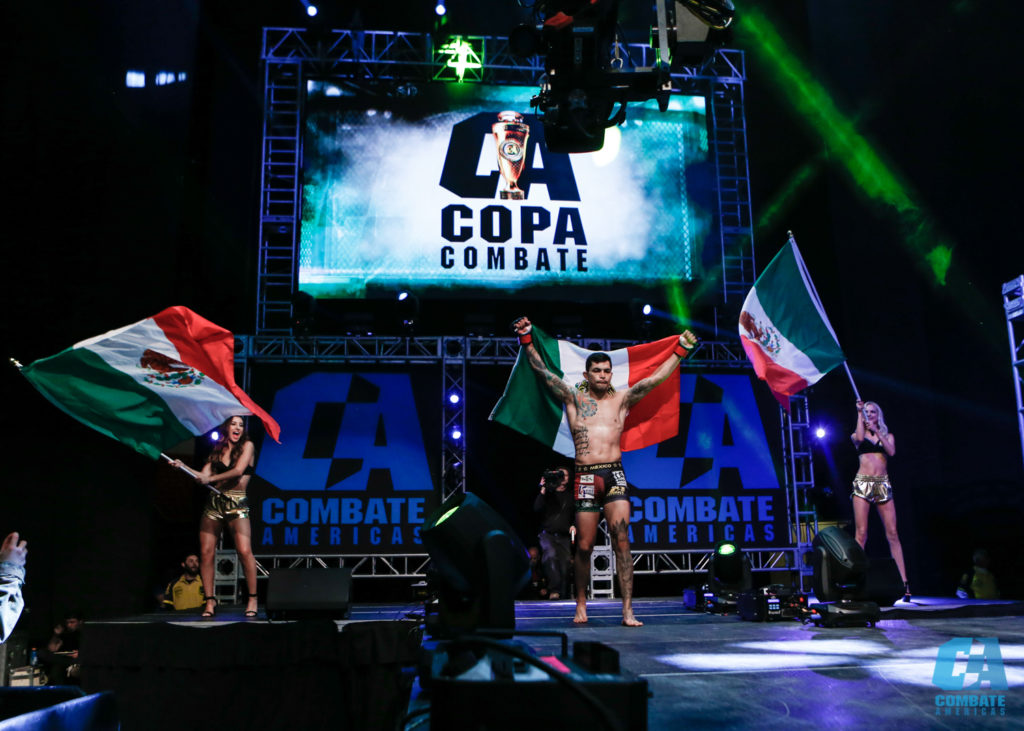 This situation will make Pablo Sabori a stronger and more intelligent fighter. He has already lived through a great challenge, and now knows that only thing that can stop him is himself.

Waiting for his return to the sport, Sabori is confident that by the end of this year or January 2020, “El Gallo Negro” will be fighting and once again delighting the fans of this sport.

“One thing that I take away from all this is that for the next fight, if they want to beat me, literally they will have to kill me because I will not get out of the cage without that victory. I have had many bitter tastes leaving the decision to the judges and I must go out to get the finish. They have to get the dead “Gallo Negro” out of that cage if they want to beat him. We come strong and doing things the way they have to be done to get back to doing what I like most, which is fighting and giving a good show for people.

I don’t regret having gone ahead with the fight despite the injury,.I said it and I say it again, like all good Mexicans, when did you see them back out? Maybe that influenced my thoughts about making the decision to go ahead with the fight. It [has been] difficult. I went days without seeing my family. I spent days in Fresno, they were worried but here we are, ready, slowly doing things to be back in the ring.

I’ve been talking to my team and doctors. Everything seems to indicate that if everything goes well, at the end of December or early next year, I will be back in the cage as if nothing had happened. I have been very intelligent in this recovery, and we are trying to do the best we can. I’ve had some problems with my physical and injuries but we are working on it.”