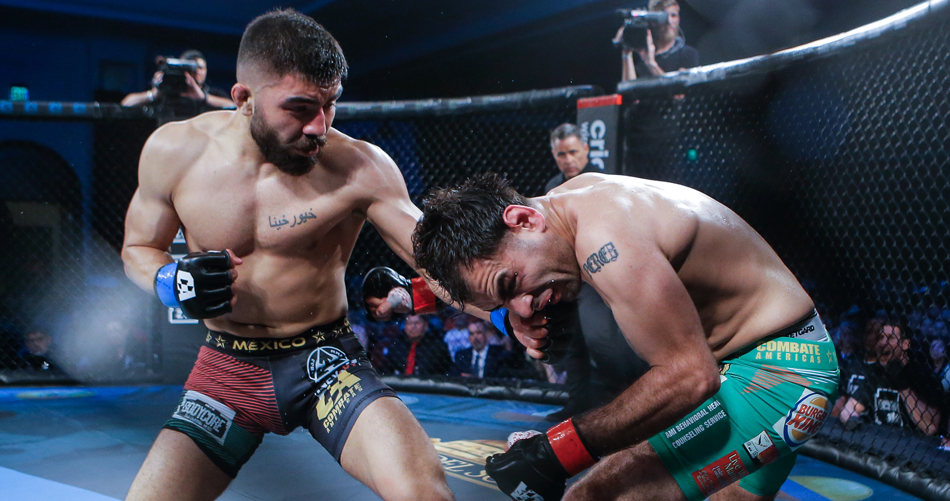 Eduardo “El Pube” Alvarado is aiming for his third victory as he enters “La Jaula” for the fourth time. He is facing Jose “Puppy” Calvo in “Combat Americas: Tucson Unbreakable, presented by Cricket Wireless”.

Alvarado, 26, defeated Andy Perez by unanimous decision in Combate 33 last March, where he showcased his striking skills and ground game. The fighter, born in Tijuana, Mexico,  said that he has prepared in all possible areas for his upcoming fight, and that he plans to win by using his best weapon: Mexican Boxing.

“Practically [I’m] doing the same [as last time],” Alvarado said of his training. “Always training there at Entram [Gym] honing my boxing with Zero Sánchez, at a boxing gym there at the Libertad Iron Fist, doing my strength and conditioning at Body Core right there in Tijuana, and right now I’m also incorporating some days of the week to exchange my training at Entram through here at Alliance in San Diego taking advantage of their world championship level.”

In this upcoming fight, Alvarado will face Calvo, a fighter from Costa Rica that has an 8-1 record, with six wins in a row, and who is making his Combate Americas’ debut. While “El Pube” has a lot of respect for his rival, he believes he will defeat Calvo next Friday.

“[Calvo’s] a very well-rounded fighter too,” Alvarado said. “He’s currently a mixed martial arts prospect. He’s training with a really good team there in Chicago, so I’m hoping for a war. It’s a very good opportunity for me to continue demonstrating my skills, and I’m excited for the challenge.”

Alvarado, entered Combate Americas in September of last year, and immediately showed his “Mexican boxing” abilities, defeating Roman Salazar by first round TKO. He plans to continue his winning streak and cement a place for himself within Combate Americas.

“I currently have three fights in Combate. I won, I lost, then I returned to victory, and this time, I just can’t neglect myself,” the Mexican said. “This is MMA. One mistake, just a second can completely change the course of the fight but, this time I’m sure, I’m training just as hard or harder than last time, to fine-tune every detail so there is no mistakes and to keep me on the same path to victory, and prove myself as a Combate Americas’ prospect”.

“A skill that is characteristic of my fighting, a skill that I have and already have been able to demonstrate is my boxing, my Mexican boxing,” said a proud Alvarado. “I think I’m going to have that small advantage always. I try to always polish my boxing there in Tijuana, taking advantage of the big gyms there and try to impose that advantage on my opponent in every fight.”

“Combate Americas: Tucson Unbreakable,” presented by Cricket Wireless” will also feature the return of former bantamweight champion Jose “El Pochito” Alday, who is Alvarado’s teammate at the Entram Gym. Alvarado won his match, but Alday ended up losing the title to Gustavo Lopez. “El Pube” believes that they will both get the victory this time.

“Sharing the same card with ‘Pochito Alday’ is always a great pleasure for me,” he said. “He’s like a brother. We enjoy what we do the same way, and to share the same fight night is beautiful.”

“The last time things did not happen as we wanted,” said Alvarado. “But still, we are in this together and I am sure that Alday will return stronger than ever for this fight.”

For more information about the card and how to get tickets, visit: Combate Americas: Tucson Unbreakable, presented by Cricket Wireless.