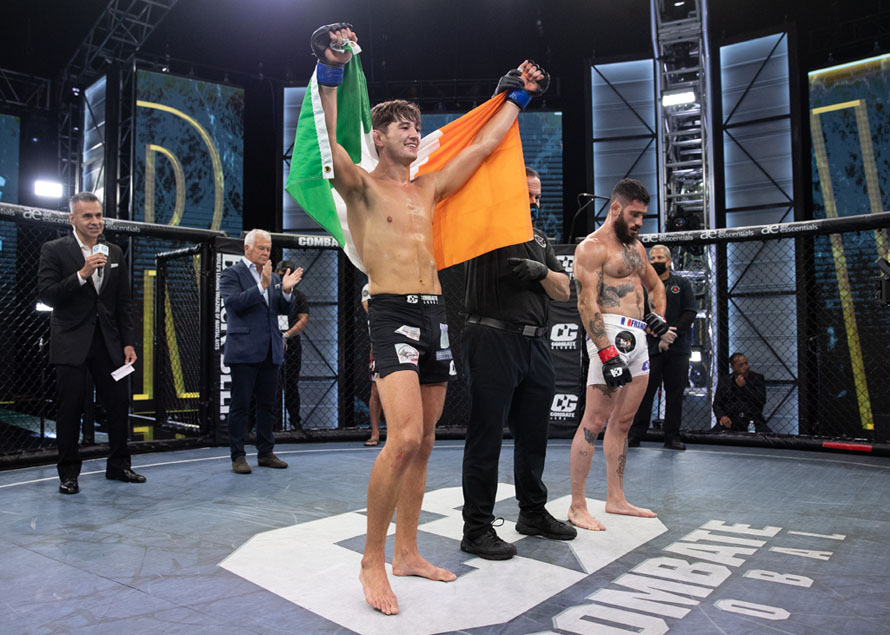 Lehane, who made his professional debut, defeated France’s Maxime Giacalone at 4:34 in the first round by TKO in the finals of the tournament.

Already entering la jaula with tons of buzz, Lehane, who came in with 19 amateur fights under his belt, solidified himself as an up-and-comer to keep a close eye on.

Giacalone and Lehane both exchanged shots. At one point, Giacalone inadvertently kicked Lehane in the groin, but Lehane didn’t use his five minutes.

The Irish continued to land shots including a left hand which shook Giacalone. The fight eventually went to the ground where Lehane searched for a triangle choke, but from that position he landed elbows to the temple. Lehane continued an onslaught of fists, which led the referee to stop the fight.

To get to the finals, Giacalone defeated Italy’s Gianluca Rocca (6-1) at 2:13 in the first round by rear naked choke submission. While Lehane, defeated Spain’s Sebastian Santana Guedes (8-6) by unanimous decision.

In a fight that went back-and-forth and had hints of the classic bout of Wanderlei Silva vs Kazushi Sakuraba, both men went toe-to-toe striking each other consistently with few take down attempts. A fight that could potentially be nominated as a fight of the year. After three rounds of action, the judges were left to make the decision.

Irlanda Galindo defeated Maraya Miller at 4:51 in the second round by rear naked choke.

Also, the 18-year-old Galindo defeated a tough and experienced Miller. Flash forward to the second round, Miller used her judo take down Galino. Miller worked out of ground-and-pound position, yet Galindo transitioned, where she landed the rear naked choke to pull off the upset.

Maxime Giacalone defeated Gianluca Rocca by rear naked choke at 2:13 in the first round.

Patrick Lehane defeated Maxime Giacalone by TKO at 4:34 in the first round

Iralanda Galindo defeated Maraya Miller at 4:51 in the second round by rear naked choke.