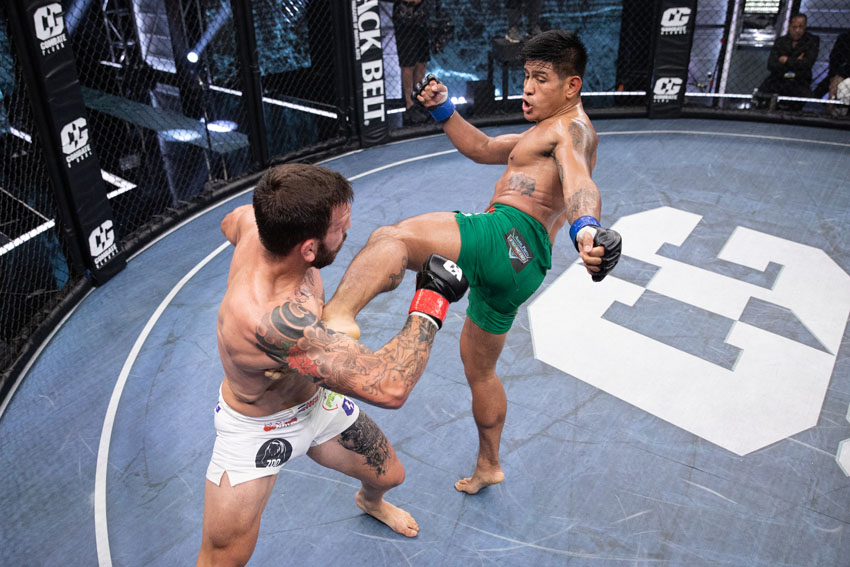 An emotional Calvo was upset at the result. The friends turned rivals battled a three round warfare.

Both fighters stepped inside la jaula intense. Less than two minutes in, Calvo landed an elbow, but Marroquin quickly followed up with a pair of combinations including an uppercut to the body. Towards the end of the round, Calvo took Marroquin to the ground but quickly the fighters went to right back to their feet. Marroquin went for a kick but unfortunately landed in the groin area.

Marroquin connected with a left hook, but Calvo had a strong enough chin to withstand the shot. Toward the end of the round, Marroquin was limping on his right leg. He managed to make it to the stool. Doctors checked his left ankle, but Marroquin stated he felt no pain.

Mid-round, Marroquin looked tired. Calvo took advantage and landed combinations. Later, Marroquin tried to land a triangle choke, but came out short leaving the fight to the judges. Marroquin’s left foot was bruised. Although both fighters were tensed leading up to the fight, both ended up shaking hands and taking a selfie.

Both fighters had a an amateur fight, but this is the first time they meet inside a professional cage.

Hernandez opened up with a hard inside leg kick. She attempted a spinning back fist, but it didn’t surprise Avila. Later, Hernandez faked a left hand, but connected with a right hook.

The second chapter of the fight was almost a mirror image of the first with both fighters connecting combinations and kicks. Hernandez did land an overhand right. With a few seconds left, Hernandez took her opponent to the floor to land a few shots.

Hernandez landed a left hook and she later took Avila down with a head and arm toss. Avila landed a right kick but didn’t make much of an impact. Avila was cut open between the eyebrows.

Ruelas opened up the first round with a pair of kicks, but Ward followed up with his arsenal of kicks as well.  Later on, Ward used his boxing to open Ruelas up. However, Ruelas did connect with a combination which shook Ward. Soon after, Ruelas landed a high kick that echoed inside Univision studios, but Ward managed to defend it.

Flash forward to the last round, Ward landed a high kick. Soon after, the fight went to the floor but quickly the fighters went back on their feet. Ward also got cut open near his left eye. But after the back-and-forth action, the fight was left to the judges.

Hector Ferral Perez is a professor in and...