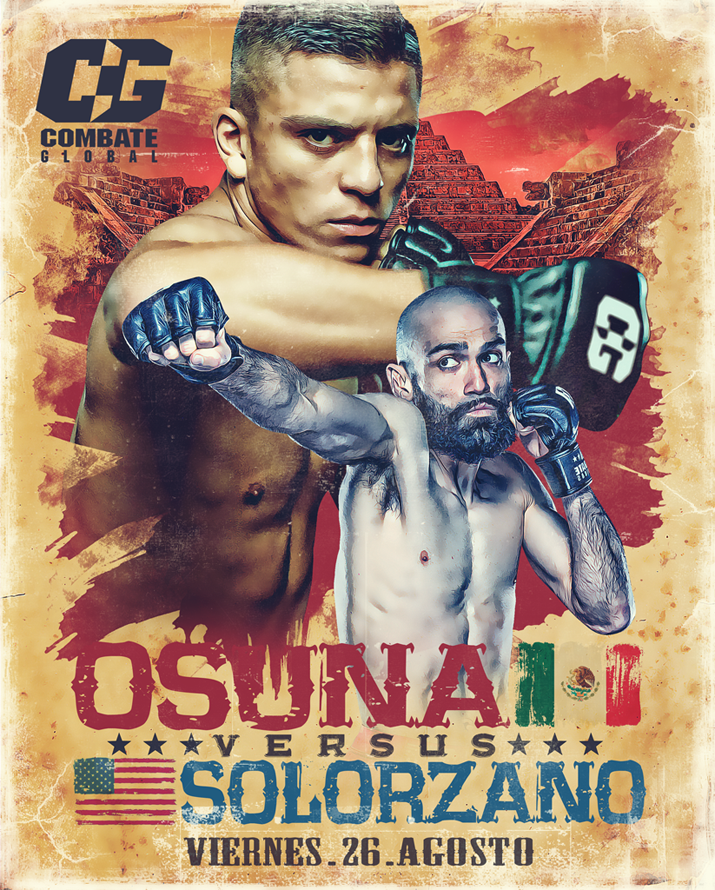 Miami, FL – There is more than just a win at stake in this Friday’s top fights in the bantamweight division of CG 2022: Osuna vs Solorzano.

One of the two winners of these two bouts will go on to challenge Combate Global’s bantamweight champion David Martinez in October.

Last time we saw Osuna in action inside la jaula was against Maximiliano Gonzalez when he defeated him by way of technical knockout in the third round. Osuna, who trains with Samurai FC in Guadalajara, Mexico but wanted to make some adjustments. For this camp, he came to Las Vegas to train with Cobrinha BJJ. He only fought once in 2021. He was eager to compete more but an injury forced him to say away from action. However, he has his eyes on more fights and a potential title shot in 2022. His entire professional career has been with Combate Global garnering three submission and one TKO victories.

California’s Solorzano has yet to be defeated counting on two unanimous decision, one split decision and two TKO victories. The Dragon House fighter last competed against the striker Raymond Ramos back in April. With 20 amateur fights in his fighting resume, Solorzano has proven to be a serious threat to this division. The jiu jitsu purple belt is also an expert in Kung Fu obtaining a brown belt.

Expect Osuna to carry the fight right from the start forcing Solorzano to either either fire back with his fists or he will need to use his footwork. The floor could be deadly for Solorzano knowing the submission victorious Osuna has obtained. Solorzano needs to land body shots and counter attack if he wants to potential get a crack at gold. As for Osuna, his aggression could wear Solorzano down eventually picking his foe apart allowing him to go for the finish.

Muniz’s last appearance in Combate Global was competing in Copa Combate last December. However, prior to his fight in May of last year, he had not competed since 2015. He went 3-1 in 2021. He lost to the Copa Combate semi-finalist Kevin Cordero by TKO. Since then, the New Yorker, who trains with Gracie New Jersey with the like of Mickey Gall, became a father again and has been feeling healthy and has his eyes set on a potential title shot.

With over 15 fights, Cubillo made his Combate Global debut against Justin Vazquez back in May. It was a unanimous decision loss to Justin Vazquez, but it is a fight that he took on a short notice. This time around, he had a full camp. He has victories over Combate Global alum Jose Alday and many more.

Expect Muniz to come in swinging right from the start as he is an aggressive fighter, but Cubillo is more of a patient fighter measuring when the right time to strike.