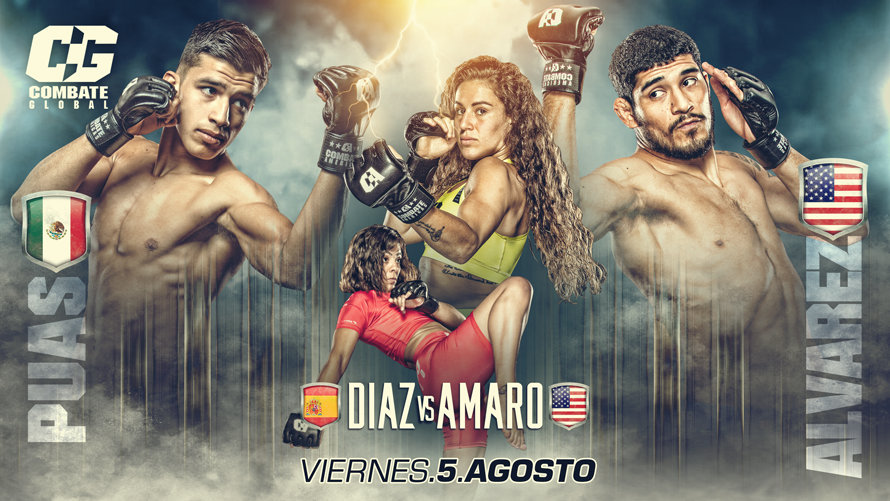 Also, in a women’s fight at 115 pounds, Claudia Diaz (18-11-1 combined martial arts record) looks to get back in the win column when she faces Andrea Amaro (2-2)

Last time Perez, ranked second in the lightweight division, performed inside la jaula, he put on a grappling clinic defeating Sebas Santana Guedes in April by way of unanimous decision. He controlled the entire fight leaving Guedes questioning how he can find an opening to land something.

Perez, who has trained with the GOAT Shed Academy in Miami and the Blackxicans in Mexico, says he has upped his training perfecting his striking working with top ranked boxers Omar Aguilar and Ruben Aguilar. He also just received his purple belt in Brazilian Jiu Jitsu.

As for Alvarez, ranked seventh in the lightweight division, he returns to action after defeating Jordan Beltran by split decision in May. Alvarez, how has great wrestling, traded hands with Beltran. He directed the fight to his liking. He trains out of Gracie Jiu Jitsu and Gracie Fighter Stockton, California.

Expect both men to exchange hands right from the start especially since Perez has been training with boxers, he would like to test his skills he as been defining. As for Alvarez, he’ll retaliate with his fists. If the fight goes to the ground, Perez could capitalize on his jiu jitsu, but Alvarez sharp wrestling could allow him to escape and transition when necessary.

The Muay Thai expert, Diaz returns to action after falling short of a victory against Manuela Marconetto by way of decision back in April. Since then, she packed her bags from her Texas gym and moved into Miami’s MMA Masters where she has been training for this camp. The gym counts on jiu jitsu extraordinaire Daniel Valverde.

On the other side, Amaro is coming off her first victory in Combate Global when she defeated Carolynn Cordoba by technical knockout in the first round back in April. She trains out of the Zen Martial Arts, 10th Planet and Elite Kickboxing in Texas.

Right from the start, Diaz will display her stand up game combining her striking and kick combinations. Amaro, who has great cardio, will be able to counter, which could be a back-and-forth type of fight. However, should the fight go to the ground game, a slight advantage will go to Amaro.