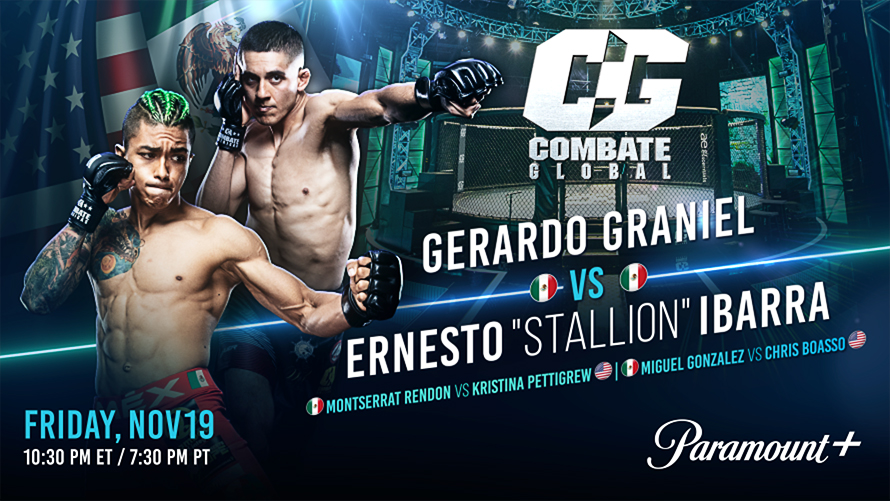 Miami, FL – Mexico’s Gerardo Graniel (7-2) returns to la jaula to face Ernesto Ibarra (5-1) who is looking to bounce back from a defeat back in May in a flyweight scrap this Friday, November 19.

Also on the fight card, straight from a victory the tri-Athlon athlete Montserrat Rendon (1-0) will meet Kristina Pettigrew (1-1) who competed for Combate Global back in 2019 and Miguel Gonzalez (4-1) meets Chris Boasso (3-1) in a featherweight battle.

In September, Graniel defeated Roger Blanque as the fight came to an end due to his opponent’s injured knee, while Ibarra was defeated by Alan Cantu Garcia by way of decision.

Graniel knows his opponents has a strong jiu jitsu background as Ibarra, who has a purple jiu jitsu. Ibarra trains with the Blackxicans home to Cristian “Puas” Perez, but also has a solid striking background.

However, Graniel is confident that his hands will do the talking in this battle training with the likes of Perry Montano and Raul Salas at Bonebreakers gym in Mexico City.

Look for a fast-paced fight between these two who are not afraid to test each other where the fight goes.

Fresh off a victory against Micalea Rampage in September, Rendon counts on a great counterattack and hand combination as she displayed in her debut. However, unlike her first opponent, Pettigrew last competed in February 2020 and has experience. Since her last bout, she competed in grappling matches testing her ground game.

There’s no doubt, that Pettigrew will throw Rendon off as she will go for the takedown. Rendon, who has incredible endurance, will be tested not in striking but with the ground game. She will have to put the pedal on her takedown defense as Pettigrew. She trains with the likes of respected fighters such as Angela Hill. Jessica Penne and others.

But Rendon also carries a purple belt in jiu jitsu so she also won’t be afraid of pulling the trigger and take the fight to the canvass.

The ADAM camp fighter, who is currently working on opening a Mezcal based business, said he likes to work in the ground and apply the guillotine choke. However, Boasso has a promising career training at Sanford MMA and has a solid wrestling background.

Both men should test each other with their striking, but whomever shoots for the takedown first could have the advantage.