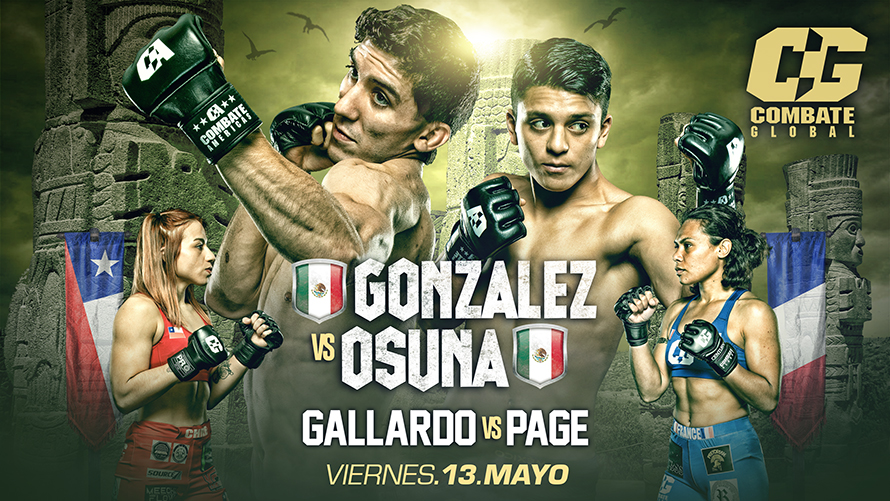 Miami, FL– Last year’s Combate Global’s “Comeback of the Year” award winner Maximiliano “Steel” González (3-1) will continue his efforts inside la Jaula when he meets the returning Axel Osuna (3-1), who is hungry for a win after facing his first professional career defeat, in this Friday’s CG 2022 May 13: Gonzalez vs Ozuna main event in a bantamweight (135 lbs) clash.

In the co-main event, a battle between two women in the strawweight (115 lbs) division, when the explosive and fan favorite Caroline “Taz” Gallardo (6-4) welcomes Stephanie Page (6-3), from France in what could be a  stand up war.

And, in a featured featherweight fight, Ireland’s Patrick Lehane (4-1) will take on the debut of Gabriel Morales (3-2) of Deerfield Beach, Fl.It will be Lehane’s debut at featherweight.

Osuna faced his first defeat when he lost to Junior Cortez in June by decision. He now has put the defeat behind him and has been working on his skills that will lead him to win. He was eager to return to action, but an injury prohibited him from competition. Training out of Samurai FC in Guadalajara, MX., Osuna counts on his explossive boxing background. In fact, he started his combat sports career when he was part of a boxing team in Jalisco, Mx.

His hands could be trouble for Gonzalez who faced a tough challenge back in October against Bryce Gamboa. Gonzalez’s for had the edge when fists were exchanged.

However, Osuna’s submission game is what has set him apart in his young career defeating all his opponents by submission.

The ground game is where Gonzalez feels comfortable. In his fight with Gamboa, he exchanged with his foe landing over hand shots, but he came up short from damaging the then undefeated fighter. It was on the ground where Gonzalez was patient and pulled off an unexpected rear naked choke to win his CG debut. However, Gonzalez realized he needed to sharpen his boxing so, for this fight, he trained with White Collar Boxing to improve his skills.

It is a fight where both fighters have similar backgrounds. Anticipate a lot of combinations from Osuna to cut Gonzales’s lateral footwork. If Gonzalez doesn’t feel comfortable, he will more than likely venture to the ground, which could set for a back-and-forth transition bout on the canvass.

Gallardo is riding on a two-fight win streak, recently defeating the powerful Criszaida Adames by unanimous decision. A fighter with a fast-paced action, she is confident with her stand up game exercising powerful kicks.

These will come handy as her opponent, Page, has a background in Muay Thai and it is her bread and butter. She just recently defeated Dani McCormack by way of punches.

It should be a fight where we will see a technical standup battle.

After competing in November’s Mexico vs USA tournament on a short notice, Lehane has set his sight on a new division, featherweight. He competes against newcomer Morales who will make his CG debut. Lehane is an exciting and rising star with great standup, which credit goes to his training at SBG Cork City. Lehane made his professional debut last year racking up four victories thanks to competing in two tournaments.

However, Morales is up for the test picking up a victory over CG’s Jair Perez by a vicious right hook back in November 2020. His most recent victory was against Carlos Ochoa in May. He will need to move in vertically and strike with Lehane, who has an orthodox foot stance.

This will be a fun fight with two fighters who won’t hold back and love to trade blows.