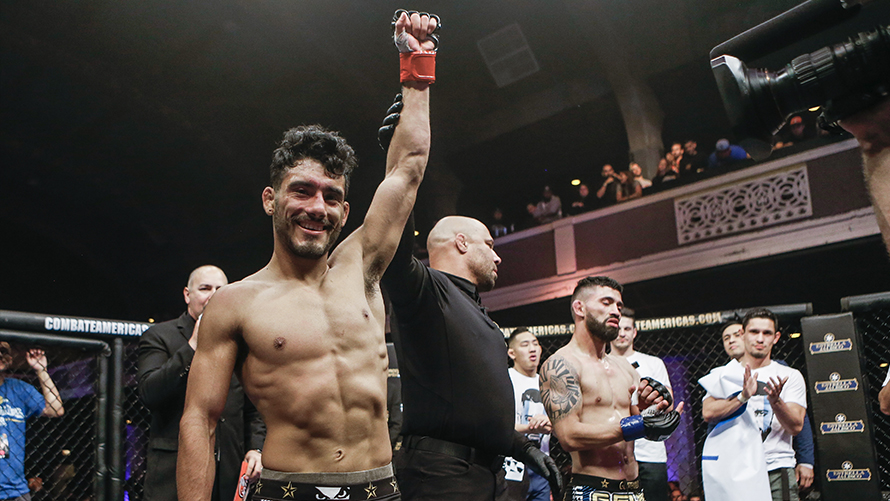 1. Who was your toughest victory against in MMA and what made the win so challenging?

Answer: Combate Estrellas 1 vs my friend Heinrich Wassmer. What made the win so challenging were the significant challenges I faced before I entered La Jaula. I was told that week by my ophthalmologist that it could potentially be the last fight of my career and it was difficult to overcome. Also finding out that my mother in law had been diagnosed with Cancer.

2. In the first round Wassmer had your leg pretty tight and looked at one point to almost have gotten the knee bar and then the heel hook.  Was he close in either of the exchanges?

Answer: Yes, he was close on both exchanges and it was very painful to endure. Having trained with Heinrich I knew he had a great ground game so I knew when he got a hold of my legs I was in real trouble.

3. You scrambled really well in the grappling exchanges, got out of danger a few times.  What’s your grappling background?

Answer: My grappling background is wrestling. I wrestled throughout high school, doing folkstyle and freestyle/Greco seasons with nearly 400 matches under my belt within those four years, competing in one of the best states in the country for wrestling. I’ve always been confident in my ability to scramble, transition and adapt to any situation. Since coming to West Coast Jiu Jitsu I have been able to transcend my abilities from wrestling to Jiu Jitsu thanks to my coaches and training partners.

4. You never stopped working in that fight.  Is that something you train, volume and output, or does that come naturally with the urgency of being in danger or both?

Answer: Again, that goes back to my wrestling mentality, constantly fighting to control, dominate and impose my will on my opponents. I have great coaches in Joseph “Hoss” Janik and Brian Espinoza that never stop pushing me and they make it easy to continue to embody that mentality. Like my walkout song, I’m “Non Stop.”

5. Your right leg looked heavy in the 2nd round.  Was it injured? (up to you whether you want to answer this one or not, not sure if you wanna keep that quiet or not)

Answer: It was actually my left knee that was injured. I had hurt it several weeks before the fight and because of that, I not only had to change the way I trained but also the way I fought. It definitely hindered my ability to move the way I normally do. After that I went on to win two more fights with the torn meniscus until finally deciding to proceed with surgery.