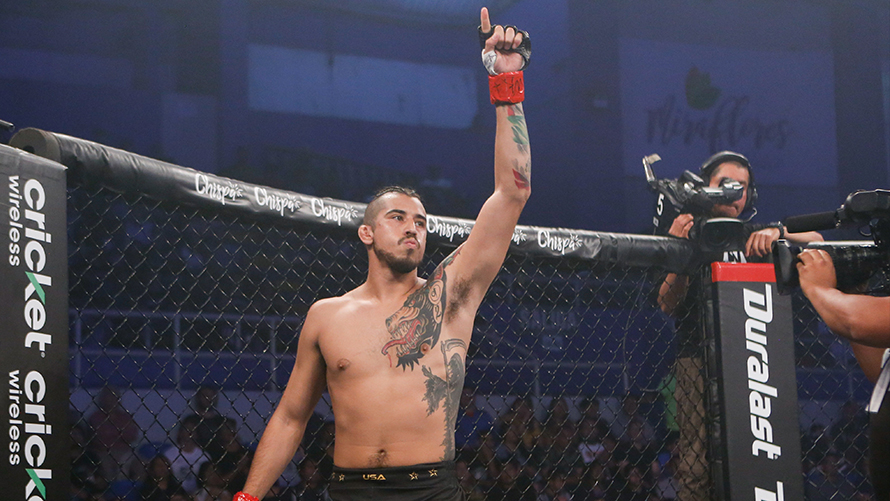 I had a phone call with the one and only Erick “The Ghost Pepper” Gonzalez to discuss how he got into MMA, his role models, training and so much more.

Read on to learn all about The Ghost Pepper.

1) So you started wrestling at 13 years old, but when did you start training MMA? And where do you train now?

2) Were you a natural at MMA, and did you have any physical attributes that helped with your progression?

Erick: Yes I do. For my weight and height I have a very long reach at 74.5 in. I’ve always had great cardio and my wrestling experience gave me an upper hand. In the beginning, I felt physically strong against people my size, though at my current level everyone’s strong. Mentally, I had an advantage since I’ve never had any real fear or nerves that would affect my performances. This was most likely due to all the street fights I had been in already. I have a photographic memory, so I learn and remember techniques easier than most people and I advanced quickly.

3) How far did you go in wrestling and were you involved in any other sports?

Erick: I wrestled from 13 years old and all the way through High School, until I suffered an elbow injury. Even though I partied a lot in those days, I still made it to the CIF State Championships. Having that wrestling base and experience has had a giant impact on my career. I was very active in sports growing up. I ran track and also did hurdles. I was even on the surf team.

4) Were you small growing up and when did you hit your growth spurt? Did you get picked on?

Erick: I was actually small and pudgy growing up until I was a sophomore in high school. I definitely got picked on, but it was by my older brother’s friends and cousins. I’ll never forget my first time getting punched in the face. I was in second grade, but I remember that moment like it happened yesterday, because of how bad it made me feel.

5) Besides your MMA coach, who are some of the role models in your life?

Erick: Two of my biggest were my mom and older brother. My mom has always been very fit and athletic. So much so that I would do some of her routines to get in shape by running and hiking. She would make me carry weights up the hills and wouldn’t be going easy on me. My brother was also a huge inspiration as well as a gifted athlete. I was lucky to have a man, Ceasar Archeannsera, who always believed in me and gave me so much confidence in myself. My brother’s friends were driven, and one in particular was an advanced trainer that specializes in making high level military go to their breaking point, to build their mental strength. I was lucky enough to train with him and I do carry what I learned from him into the cage. 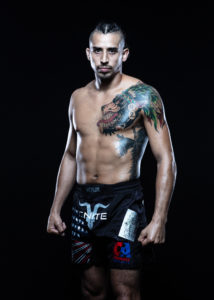 6) So what does a normal week of training entail for you? And though you’ve never been finished from strikes in an match, have you ever been knocked out in training?

Erick: I do Brazilian Jiu Jitsu five days a week and MMA training three days a week. Once a week we spar but only go to about 70% but there is one time a month where my team has hard sparring. For cardio I have always ran more than most fighters. Every Saturday and Sunday I do a 6.6mi. run at a very fast pace of 7.5mi. an hour. The struggle of running has been one the greatest things for my fight game and mentality because the place it brings me is similar to a fight itself. I have never been knocked out in my life and only been dazed a couple times.

7) What has been your toughest fight to date and who hit the hardest?

Erick: My hardest fight was against Rafa Garcia, and Humberto Bandenay definitely hit the hardest. Bandenay landed a shot in our fight that had me stunned for a second.

8) What was it like to headline your first event in Combate “Road To Copa Combate,” (September 28th, 2018) just two years into being with the promotion?

Erick: Yes, the first card where I was the headliner was the best event of my life. There was so much hard work and sacrifice, and it finally paid off. It boosted my self worth and confidence that I was on the right path. My family was so proud of me, and everyone was either there or watching. I know so many fighters don’t even make it on live television and I was the guy on the posters. My family and I had been watching the exact channel my entire life so it meant the world to me to be on it. All the shows where I’m the main event are never taken lightly and always give them my all.

9) What was it like to fight three times in one night in the “Copa Combate” tournament?

Erick: That was a crazy night, and I loved it. It wasn’t easy for me especially because my final fights of the night had basically no break in between. I love fighting and will never make excuses, but I do think I could have won all my bouts on that night if the circumstances were different.

10) You’ve been a commentator for Combate Americas for AXS TV with Julianna Pena and Max Bretos. Does being a commentator help since a lot of these are fighters in your division and possible future challengers?

Erick: It’s very beneficial to watch guys I will potentially fight. It’s my job to analyze exactly what these fighters are doing in there. A lot of fighters are very stuck in one style and approach to their fighting. The thing with me is you never know what i’m going to do. I’m a complete MMA fighter who can switch stances and I’m comfortable wherever the fight goes. I train very hard to stay unorthodox and very unpredictable.