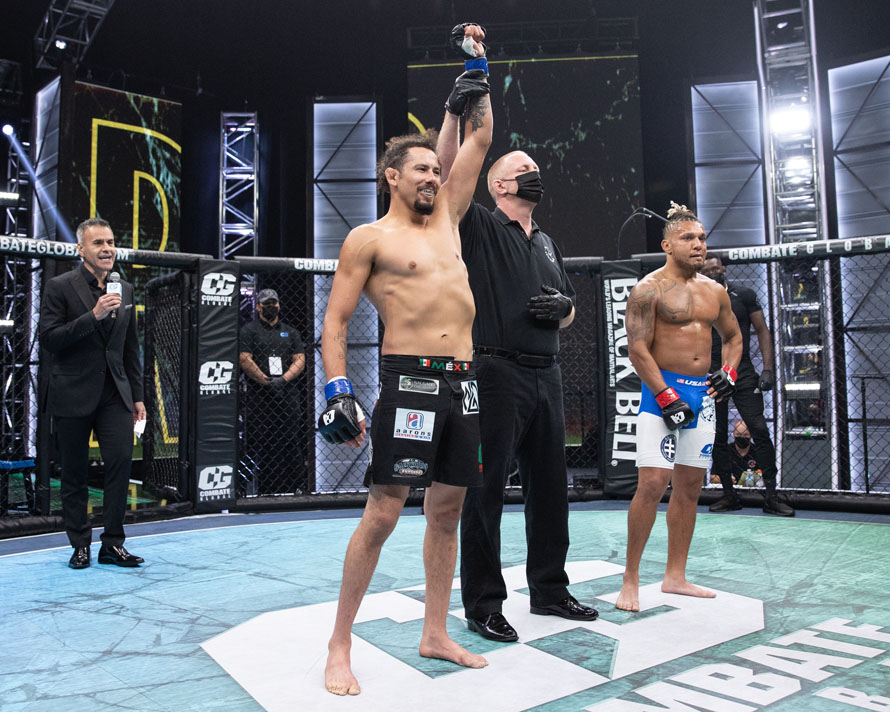 Miami, FL -Martin Bravo’s (12-3) Combate Global debut was successful defeating the veteran Andrew Whitney by way of Technical Knockout in the first round at 1:09 in the main event of CG2021 September 17.

Whitney came in strong connecting with hard shots, however, Bravo landed a right uppercut bringing his foe to the ground and following up with hard hands leaving referee Josh Rutgers to stop the fight a

In the opening chapter, Galindo struck first with a kick. Bravo knocked Galindo to the ground, but she quickly goto her feet.

The fight went to the ground where Bravo searched for a ground and pound win, however, Galindo survived the first round showing a lot of heart.

In the last round, both fighters exchanged shots, but Galindo went to the clinch. Yet, Galindo was able to throw her the ground., but the action wasn’t enough to win her the fight.

Javier Reyes defeated Carlos Calvo Calvo at 4:59 in the second round due to the fighter unable to continue.

In the first round, Calvo came in full of adrenaline, however, Reyes didn’t fall into the trap and held his composure.

Calvo wanted to strike right from the start, at times swinging wildly. On the contrary, Reyes was precise with his strikes landing a few combinations.

In the second round, Calvo connected with a strike bringing Reyes to the canvass, but he quickly stood up. But both fighters

Prior to the start of the third round, Calvo stated he couldn’t continue claiming his shoulder was injured.

Calvo, who was put on a neck brace, was taken out of la jaula by stretcher.

Martin Bravo defeated Andrew Whitney by Technical Knockout in the first round at 1:09.

Javier Reyes defeated Carlos Calvo Calvo at 4:59 in the second round due to the fighter unable to continue.