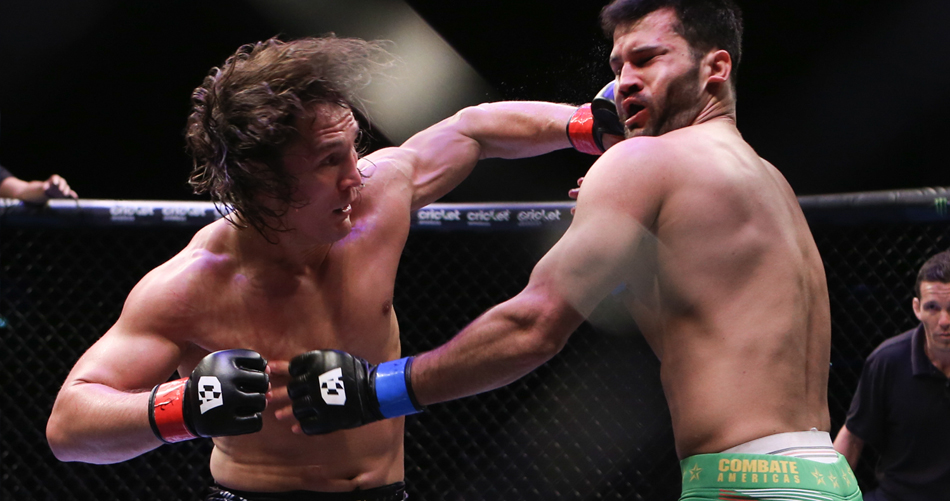 Combate Americas returns for the fourth time to Tucson, with a new, action-packed show, full of the best Mixed Martial Arts (MMA) talent.

In the main event, Mexican fighter and former Combate Americas’ bantamweight champion, Jose “El Pochito” Alday, make his return, as he faces Argentina’s Juan “El Molo” González in a 135-pound battle. In addition, renowned Mexican fighter Rafa “Gifted” Garcia will put his undefeated record on the line against Arizona’s own, Esteban “El Terrible” Payán, in the co-main event of the evening.

The Casino del Sol has been home to a few of Combate Americas’ best shows, where thousands of MMA fans have experienced some of the best fights, knockouts and submissions inside “La Jaula.” Here are some of the best moments from Tucson’s previous events.

The first time Combate Americas came to Tucson was in 2017 with the clash between Ricky “El Gallero” Palacios and Román “El Gallito” Salazar, agreed at 135 pounds. In this battle, Palacios, who at the time was one of the promotion’s most exciting fighters, managed to win by Split Decision (29-28, 29-28, 28-29).

Later in October 2018, Combate Americas returned with Combate Americas: Mexico vs. USA, a fight card with 5 out of 9 fights ending in finishes, where American fighters excelled. One of them was Anthony Birchak, who surprised everyone with a 51-second TKO over Adam Martínez, achieving the 3rd fastest-knockout in Combate Americas’ history.

Also, in that event, women surpassed expectations. Puerto Rican Amanda Serrano managed to defeat Mexican fighter Erendia Ordoñez with an extraordinary submission. Usually, we see submissions on the ground, especially the rear naked choke, however, Serrano applied the technique standing and got the win at 4:23 of the first round.

Another noteworthy performance that was David Michaud’s win over Fernando González Trevino, who dominated the entire fight from the first round until finishing the bout by TKO at the beginning of the second round.

Combat Americas came back to Tucson earlier this year with Combate 33: Alday vs. Lopez 2, a super exciting card which headlined Alday. On that occasion, Alday fought to defend his bantamweight title against Gustavo Lopez, who managed to come out with the victory and the title. It was one of the most anticipated rematches of the year, and Lopez finished it by TKO in the first round and was crowned champion.

Some other fighters that had an excellent performance in Combate 33 included: Loai Abushaar, who defeated Bret Cooper by first-round submission, sinking in a beautiful guillotine less than 2 minutes into the first round. Jonathan Juvera took less than 3 minutes to defeat Simon Haig via TKO in a fast-pace and fun fight; Tanner Madl and Marisol Ruelas defeated Joshua McReynolds and Corrie Ward respectively, via submission.

Tucson always exceeds expectations, and «Combat Americas: Tucson Unbreakable, presented by Cricket Wireless » will not be the exception, with a former champion who seeks to redeem himself, a Combate Americas’ star seeking to continue his career undefeated, and warriors who seek to make their own name.

Eduardo Alvarado Plans to Give a Lesson in...