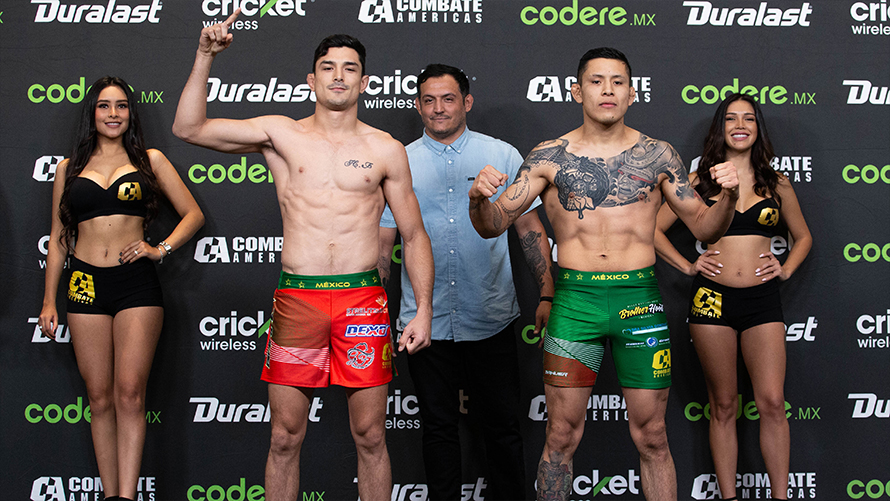 All is set for the return of Combate Americas to Monterrey, N.L., Mexico.

The 16 warriors who will enter “La Jaula” tomorrow, Friday, October 18, faced the scale prior to their respective fights.

The weigh-ins were held at the Holiday Inn in Monterrey, on the afternoon of Thursday, October 17.

The main event fighters Alejandro “Gallito” Flores (149.1) and Marco Antonio “La Roca” Elpidio (150.5) were below the established weight limit and are ready for their catchweight (150 lbs) battle.

The co-headliner, the Guadalajara native Álvaro “Chango” Herrera (172.3) was above the established weight limit for his welterweight bout. Herrera will deliver 30% of his purse to his opponent Fernando Gonzalez Treviño (170.7).

César Briones (140.1) also weighed in above the established limit, so he must hand over 40% of his purse to his opponent Rodrigo García (135.0).

The previously announced battle between Levy “El Negro” Marroquin and Enrique “Baby Bull” Gonzalez, was cancelled due to health concerns and fighter safety.

For Mexico, the fights can be seen on Channel 5 and TUDN starting at 11 p.m. CT.

The complete results of the Combate Americas: Monterrey Weigh-ins are shown below: