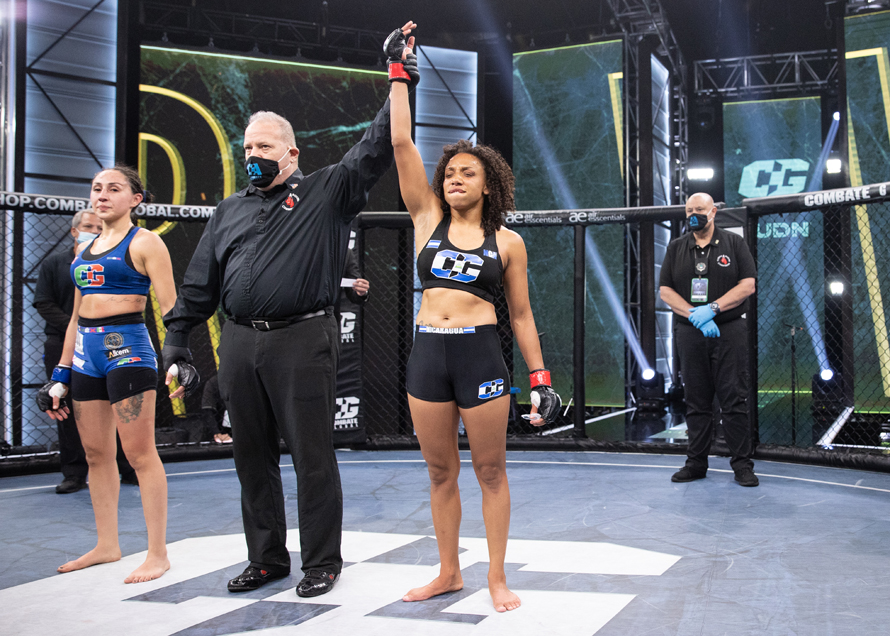 Taking the fight in just days, Yajaira Cunningham (3-2) submitted Iveth Del Carmen (1-1) by way of shoulder submission at 4:34 in the second round in the main event of Combate Global 10.

The event aired live from the Univision Studios in Miami, Fla. The event will re-air on Televisa Nueve Saturday, June 26 at 5 p.m. local time.

In the first round, both fighters felt each other out. At the end of the round, Del Carmen’s lead leg was red thanks to Cunningham’s leg kicks. Del Carmen did slightly connect with a spinning back fist, but didn’t leave a mark on her opponent.

In the second chapter, Cunningham went for a take down eventually dominating on the floor. Cunningham later unleashed a flurry of punches but with one minute left, she slowed down. However, she scooped her up and slammed her on the canvas. With just a few second left in the second round, she landed a shoulder choke. Cunningham screamed, “she’s asleep” leaving the referee to stop the fight.

Flash forward to the second round, Lloreda dropped McDowell with a hard left. He tried to finish it quickly, but McDowell overcame adversity and fought through.

In the end, Lloreda walked out of the cage with his hands raised.

Pablo Caballero (8-8) defeated Mikey Reyes (6-5) in the third round at 4:06 by way of guillotine choke submission.

For the most part, both men with head-to-head landing heavy shots. In the first round, Caballero landed a right hand that took Reyes to the canvass. He quickly landed a knee to the rib area, but the referee inadvertently thought it was an illegal knee thinking Reyes was still on the ground.

The fight continued. In the final chapter, both men went back-and-forth until Cabellero searched for the guillotine choke leaving Reyes no option to tap out.

Yajaira Cunningham defated Iveth Del Carmen by way of shoulder choke at 4:34 in the second round.

Pablo Caballero (8-8) defeated Mikey Reyes (6-5) in the third round at 4:06 by way of guillotine choke submission.

Cesar Hernandez-Arauz (1-0) defeated Carlos Apodaca (1-4) at 2:58 in the first round by way of Rear Naked Choke Submission.