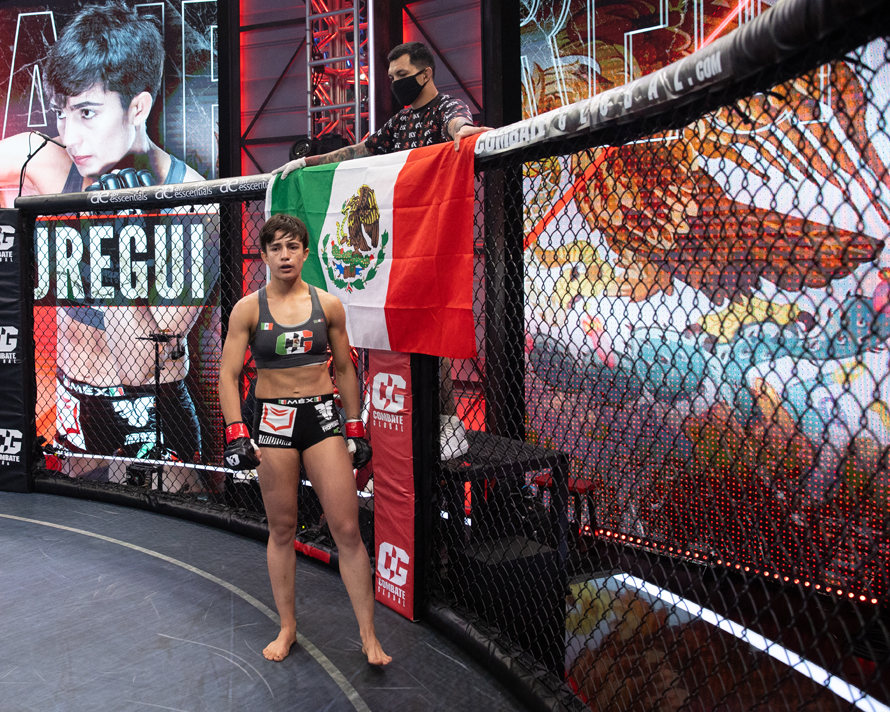 Miami, FL– Mexico’s Yasmine Jauregui (8-0) has plenty of gas in the tank and it showed after displaying an incredible performance defeating three women in one night.

Jauregui went through three opponents outperforming all of her foes.

In the quarter finals she defeated Stephanie Frausto by unanimous decision. In the semifinals she defeated Criszaida Adames by TKO and in the finals, she ran through France’s Claire Lopez as she earned victory by way of TKO due to strikes in the first round.

“I am happy. We got the resulted we wanted. I visualized but it came out better than what I thought. I am happy and ready to celebrate with my family at home,” she said.

Her last opponent used takedowns to though off her opponents. She attempted the same strategy with Jauregui, but she kept a close eye on her throughout the night.

“I anticipated her going to the floor with me. I noticed she was slow in the striking. I knew if I pressured her she would go for the takedown but I was ready for that. I work all of the areas. I am happy she let me work that area,” she said.

In the semi-finals, Jauregui competed against an undefeated rising star in Adames, but Jauregui quickly gave her the Dominican her first defeat.

“I thought she would gone all the way to the finals. She is a complete fighter. My striking had the best result against her,” she said.

The speed and consistency in her striking left the mma world asking for more.

“I consider myself a fighter with a lot of velocity. I am constantly hitting a high volume of strikes so my opponents can feel overwhelmed and I can continue,” she said after the fight.

She credits the hard work she puts in for her abilities.

“I have enough cardio. My coach Andy Caballero pushes me in my cardio. Me too I like to run, meditate as part of my discipline,” she said.

As for the future, she plans to take a few weeks am off. Soon after, she plans on preparing herself against her next opponent.